Swallowing Wild Beasts – a Re-Discovery of The Little Prince 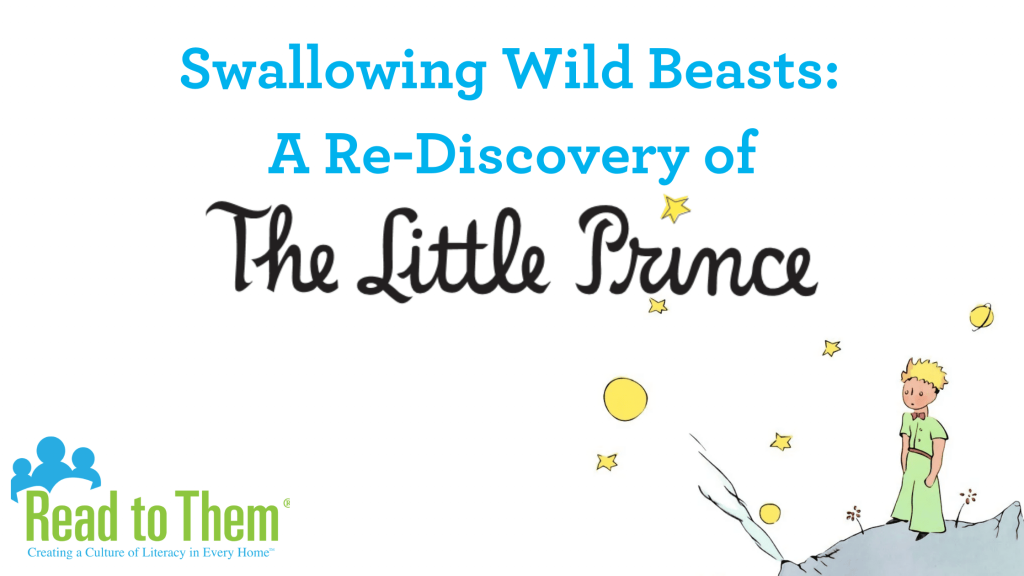 [This is a personal essay by Program Specialist, Kayla Aldrich. The Little Prince by Antoine de Saint-Exupéry is not a title in Read to Them’s catalog.]

When you look at the image below, what do you see? Does it scare you?

It looks like a hat, right? It’s got the shape and color of a hat, so why on earth would you ever be scared of it?

Now, look at the image again. Look closer, and then you’ll see why it’s alright to be frightened:

It’s an elephant that’s been swallowed by a boa constrictor! If you didn’t see it before, surely you see it now.

This is a test that The Little Prince’s narrator would use on “a grown-up who seemed to me at all enlightened” to see “if he really understood anything.” To see if one can understand what is really important in life.

Antoine de Saint-Exupéry was a French pilot and a prolific writer throughout the 1930s and 40s. He even won the National Book Award for his novel, Wind, Sand, and Stars. In 1935, Saint-Expéry crashed his plane in the Libyan desert and traveled for days to find help, an experience that would define him, and his career, for the remainder of his life.

The Little Prince is a fable narrated by a nameless pilot who crashed in the desert only to awake and find a young stranger standing beside him. (Sound familiar?) The stranger – the Little Prince, of course – asks the pilot to draw him a sheep. Disoriented and bemused, the pilot sees no other option than to pull out a pencil and paper. For eight days, the pilot learns of the Little Prince’s origins on Asteroid B-612 and his journey across six different planets before his arrival on Earth. He even learns how the Little Prince tamed a fox by creating ties with it:

“For me wheat is of no use whatever. Wheat fields say nothing to me. Which is sad. But you have hair the color of gold. So it will be wonderful, once you’ve tamed me! The wheat, which is golden, will remind me of you. And I’ll love the sound of wind in the wheat…”

I first read Saint-Exupéry’s The Little Prince as a middle schooler back in 2012. Not only had I seen quotes excerpted from The Little Prince floating around Tumblr, but I was lucky enough to have an English teacher with a sprawling classroom library. Finding a well-loved copy of the book among dozens of other well-loved titles felt like fate. I remember flying through the story in just one sitting, moved by the boy who wished to reunite with his beloved, ephemeral rose, but most of my friends were reading other, more contemporary things. (This was, admittedly, the height of The Hunger Games, Harry Potter and Twilight craze… needless to say, my focus was drawn elsewhere.)

Then, in my junior year of college, I found a second edition of The Little Prince in a used bookstore, and spent an afternoon reacquainting myself with the pilot and his strange, golden friend. It was familiar, a reprieve between my readings of darker, denser classics like Wuthering Heights and Great Expectations. I also knew that I wanted to be a published author, and every fiction workshop leader will tell you that reading a lot is just as important as writing a lot. The Little Prince is something of a storytelling masterclass, clocking in at less than 90 pages with the rich sort of prose I’d always strived to capture in my own work. Naturally, as a diligent student of the craft, I kept the book off the shelf much longer, but I still didn’t give it the attention it deserved.

Now, with college graduation two years behind me, The Little Prince comes to mind with increasing frequency. It’s a book that’s been hailed as timeless, universally cherished- and you won’t catch me disagreeing with either label. P.L. Travers, who wrote the Mary Poppins series, once said that, “The Little Prince will shine upon children with a sidewise gleam. It will strike them in some place that is not the mind and glow there until the time comes for them to comprehend it.” That, to me, is what makes the book so vital, so necessary. A global pandemic continues to rage and most days, it can be hard to let my inner child run as wild and free as she used to.

“I may be a little like the grown-ups,” the pilot realizes, rather early in his friendship with the Little Prince. “I must have grown old.”

See, what drove the Little Prince from Asteroid B-612 was that rose of his. She was vain, and the Little Prince was bothered by how much she demanded of him. When he lands on Earth, though, he is crushed by the sight of a garden filled with five thousand roses who look exactly like his rose. The Little Prince had felt rich, because he had “just one flower” that was singular, that was, in his eyes, on a pedestal that no other bloom could reach.

So many of us grown-ups have trouble looking beyond the surface of things. It’s why you probably failed the test at the start of this post. It’s not something that happens overnight, but a mindset we slip into gradually. One might argue that they don’t have time to think deeper, that they have a pressing to-do list and must get on their way, thank you very much.

At the heart of the novel, there is yet another lesson the Little Prince is taught by his fox: “It is only with the heart that one can see rightly: what is essential is invisible to the eye.”

There could be thousands of flowers, but none are as important as the single rose the Little Prince has watered and tended to. Deeper than that, there is beauty and wonder to be found in common things. A fleeting sunset. A favorite mug. A pen that writes better than other pens. What makes these things important to you, of course, is the love and care you’ve put into them.

It’s a simple truth, but it’s something that can easily be forgotten when issues deemed more pressing are at play. Though I’m only 23, it often feels as if I’m racing against time, that I cannot rest until I’ve accomplished a lifetime’s worth of achievements. When that mindset threatens to consume me, I try my best to step back. To take a breather. For the first time in years, I’ve started to paint again. Sure, my landscapes aren’t giving Bob Ross a run for his money, but they’re mine. I sat with them and I mixed every color that ultimately landed on the canvas, and even if none of my little wonders are very good–

What is essential is invisible to the eye.

I try to gently remind myself of this as often as I can. It’s something I have no doubt many of us could benefit from hearing, now and then.

The Little Prince may be categorized as children’s literature, but that doesn’t mean its lessons expire once elephants swallowed by boa constrictors begin to look like hats. That’s the beauty of children’s books: their lessons are universal, packaged for children but accessible to all ages.

And that’s the power of any good book, isn’t it? To revisit characters and their messages, and be touched by them both in new ways. To have such vital lessons standing by, ready when you are.

Ready when you need them the most.