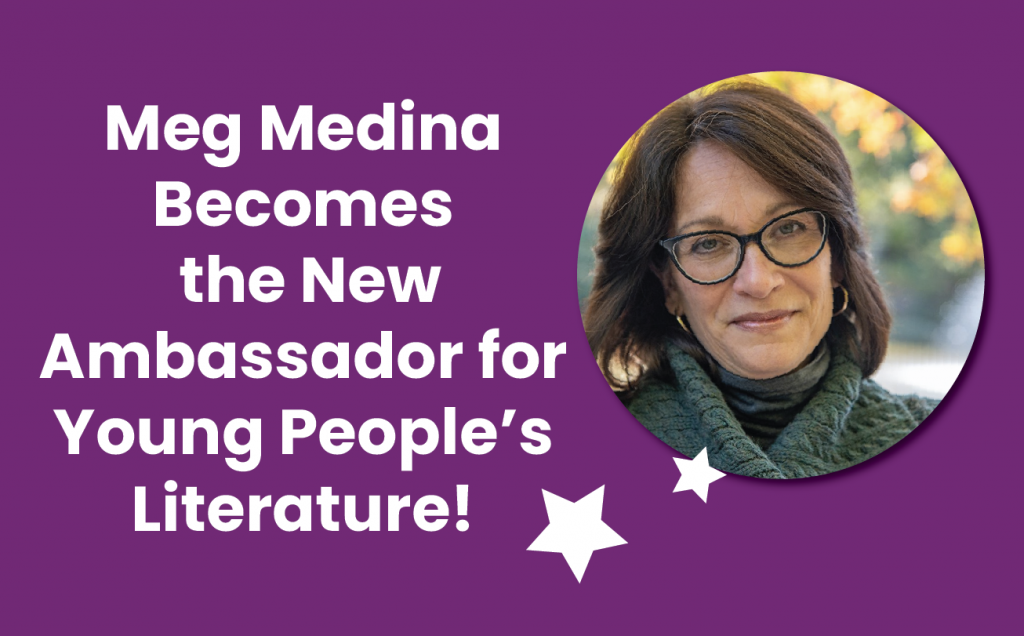 Earlier this week, it was announced that Meg Medina will serve as the Ambassador for Young People’s Literature for 2023-24! Medina is the first author of Latina heritage to serve as a National Ambassador in the program’s history.

Medina was raised in Queens, New York and now lives in Richmond, Virginia. Her career has spanned over a decade, during which she’s written both picture and chapter books. Each of her works deftly and beautifully highlights how culture and identity intersect through the experiences of her young protagonists. Her middle-grade novel “Merci Suárez Changes Gears” was the recipient of the 2019 Newbery Medal and named a notable children’s book of the year by the New York Times.

In Merci Suárez Changes Gears, the first of a completed trilogy, Medina brings the reader right into La Casitas, the compound of bright pink houses where Merci’s extended family lives, loves, and learns together each day. It is the intergenerational heart of the novel, and Medina crafts moments and emotions based in her own Cuban-American family that ring true to any reader. Her blend of Cuban culture, quips, and traditions give the story a rich vibrancy, authenticity, and honesty. With pesky little nephews, a kind older brother, a grandmother full of advice, and a beloved grandfather sliding into dementia, the Suárez family is complicated, sometimes messy, but always loyal and strong. That support leads Merci to understand that while change is inevitable, she is up to the challenge.

During her term as the National Ambassador for Young People’s Literature, Medina will launch a platform called Cuéntame!: Let’s talk books to engage with young readers across the country. Medina drew inspiration from ¡Cuéntame!, a Spanish phrase friends and families use when catching up with one another. It’s also a phrase that inspires and encourages building connections among families, classrooms, libraries and the wider communities by talking about books that reflect the readers’ lived experiences and those that expose readers to new perspectives.

We at Read to Them are so proud of Medina and this monumental achievement. We had the privilege of sitting down with Medina this past November, as we discussed Family in all their wondrous, flawed glory. Check out the full interview, here, or watch it in its entirety below.