Through the Lens of Quiet Courage 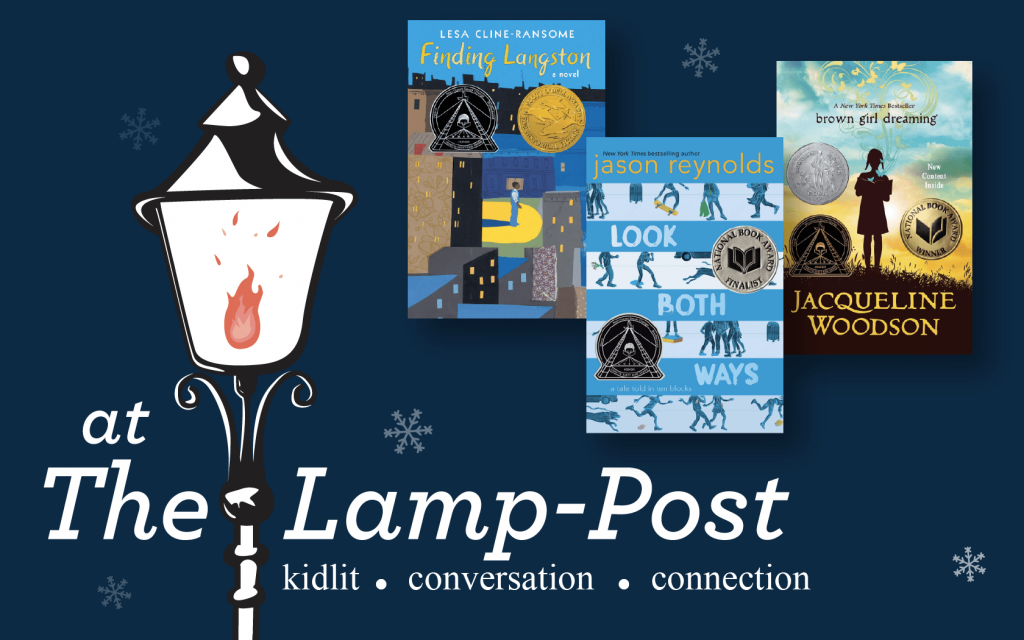 At first glance, these words have no overlap, no lens-shaped area of commonality. And yet, if we use a sharper lens, we find that quiet can be an essential characteristic of courage. Lesa Cline-Ransome, Jason Reynolds, and Jacqueline Woodson show us the poetry of quiet courage –  with a little help from Langston Hughes.

When a man starts out with nothing,

When a man starts out with his hands

When a man starts to build a world,

He starts first with himself

And the faith that is in his heart –

The will there to build.

It must be that authors feel this same quiet courage when trying to build a world from an idea and a blank page, facing an unknowable future. We, the readers of their ultimate stories, are so lucky that they – as Jason Reynolds says –  “jump anyway.” With that leap, we are gifted wonderful words – characters and stories – that prove courage doesn’t have to be bombast and armor and swords and hills to die on. Instead, courage can be firm resolve, inner strength.

Witness the soft grace in Finding Langston from Lesa Cline-Ransome. A young boy named for a poet finds the quiet courage to carry on in his new home of Chicago as he and his father join the Great Migration from their native Alabama. Now, Langston’s overalls and accent are “country,” worthy of ridicule from his new city peers. With his father immersed in his own grief over the death of Langston’s mother, the boy must face all of this strangeness largely alone. Alone, that is, until a dash to avoid schoolyard taunts lands him in the library, a place with “a ceiling so big and bright, seems like God himself is looking down.”

The George Cleveland Hall Branch of the Chicago Public Library leads young Langston to his mother’s lasting legacy, passed down to him through his name – that name, a caring librarian, a book, and then a new-found love for poetry that lay dormant in his DNA. But where is the quiet courage in that discovery? It comes, finally, when he steels himself to share his bridge to his mother with his mourning father, carving the smallest of notches in the armor the man has built around his own pain:

We’re quiet for a bit.

“Read me a poem?” Daddy laughs.

I try to remember how Miss Fulton read the words, slow and strong. I open one of the books and start.

The quiet courage to share a poem brings this father and son closer, close enough for a father to see the importance of the library to young Langston. Close enough to allow his son to build a bond of words and art with his gone-too-young mother. Close enough, in the end, for the father to ask, “Which way is the library?”

There’s nothing soft about a school bus falling from the sky. Jason Reynolds has his own way of showing the quiet courage deep inside everyday children as they do everyday things like walking home from school. In Look Both Ways, he shows ten different ways to find the depth and dignity in our children, lying just beneath the swagger and sweat, backpacks and backtalk. It might be the friendship between Jasmine and TJ even though “boys and girls can’t just be friends.” Or the Low Cuts finding the courage to face the neighborhood pool hall filled with “old men, like scraggly human cigarettes with non-human cigarettes dangling from their mouths”  – all to help one boy’s mom who could be the parent of any of them. It could be a broken skateboard leading to a boy’s confession to his mother, or an envelope with a joke inside – a gift for a Grandfather whose memory is slipping away. And, it could also be a quickly grabbed fistful of roses, thorns and all, to show an emotion you can’t quite name.

The final story in Look Both Ways weaves all the threads together as young Canton observes the ebb and flow of students leaving Latimer Middle School at the corner of Portal Avenue. That corner is the place where all courage – quiet or otherwise – once drained right out of young Canton. It happened several weeks earlier when his crossing guard mother did the most courageous thing of all – pushing a student out of the way of a school bus that was most definitely on terra firma. After that, courage has been in short supply for Canton. Luckily, Mr. Munch – the school custodian and Canton’s afterschool pal – finds just the answer, an emotional support dog, made from a push broom. With the courage-building broom dog on his lap, Canton now observes the world from his corner. “He watched his classmates tap-dance with tongues, challenging one another, slipping and sliding from story to story.”

These stories are, at their core, the thing that girds these middle schoolers as they find their way, literally and figuratively. The courage is clear, even if cleverly crafted to masquerade as a meandering walk through the neighborhood.

And then there is Jacqueline Woodson’s deeply personal masterwork, Brown Girl Dreaming, showing us her own quiet courage to find her voice, her poetry, and her calling. As a girl, words seemed to fight against her, rather than rallying to her aid. Undeterred, she clung to stories – the essence of what words are for – rather than drowning in the business of reading and writing. She safeguarded her love of story, and we are the beneficiaries of that courage.

I am not my sister.

Words from the books curl around each other

I read them again

and again, the story

settling into memory. Too slow

Too babyish, the teacher says.

But I don’t want to read faster or older or

make the story disappear too quickly from where

A story I will remember

long after I’ve read it for the second, third,

when she finally left him?

and proud, heading down

beside her and a still-crawling baby

And then in South Carolina, the courage of a grandmother to live with dignity in a place that constantly reminded her of her place. That place might take and take and take from its Black citizens, but it cannot erase a memory of a long-ago slight and the courage to walk right past, head held high.

We walk straight past Woolworths’

without even looking in the windows

because the one time my grandmother went inside

I wasn’t even there.

And again, her mother, this time with the courage to break out of that box that Nicholtown has put her in, to chart her own course, to find her own home.

She wants a place of her own that is not

The Nelsonville House, The Columbus House,

Looking for her next place.

So, when faced with the challenge of words dancing in front of her eyes, refusing to behave, Jacqueline had these wells of quiet courage to draw from. And just imagine if young Jackie didn’t have the tenacity, the resolve, and the quiet courage to make the most of the sounds and rhythms of words, to hold true to her love for stories. Imagine the absence of her stories for us all.

Our young people find quiet courage by seeing quiet courage – in the world around them, maybe, but definitely in these books. Then, when faced with obstacles, both external and internal, they will have the courage to jump anyway.

and aren’t always in

From For Every One by Jason Reynolds

“How you gon’ change the world?”