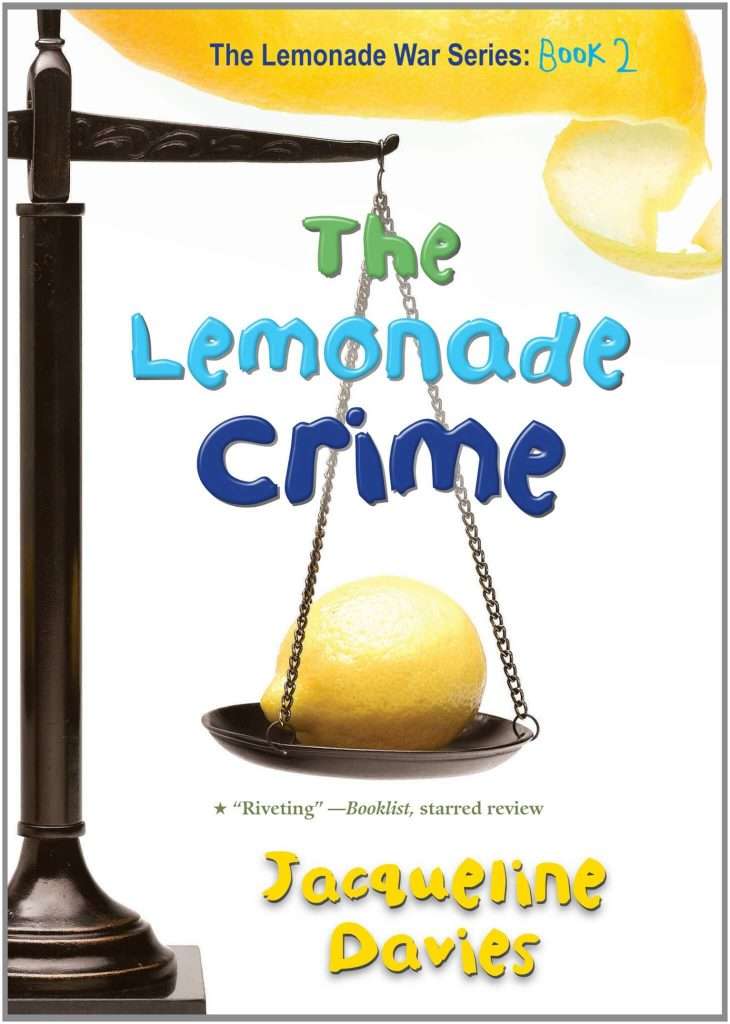 “You can’t believe everything you hear.”

The Lemonade Crime features the squabbling adventures of Jessie and Evan Treski, the brother and sister from The Lemonade War. (The books can be read independently.) Deep down the siblings love each other, but given their natural jealousies and sensitivities, they spend a lot of time being prickly. Following in the wake of Judy Blume, readers quickly recognize real kids behaving like kids they know, and want to read more.

“Just because you don’t know a rule doesn’t mean it isn’t a rule.”

The Lemonade Crime does for justice topics what The Lemonade War does for economic concepts. Jessie and Evan trade accusations regarding a petty theft which occurs at a classmate’s house during a pool party. Once the dust has settled, Jacqueline Davies uses a tried-and-true dramatic convention as the partygoers conduct their very own trial! With chapter titles like Fraud, Eyewitness, Accused, and Bona Fide, students and families will get a playful look at how the justice system works.

Jessie Treski runs the show and attends to every detail. She does her research, she knows the vocabulary and the procedures, and she assigns roles. Megan even calls Jessie the “Queen of Fair.” In the end, the students have a trial in which everyone – characters and readers alike – learns a lot about the law. How is justice served? How do we make sure both sides are heard? How to ensure the decision is impartial and fair?

“Well, due diligence is BORING.”

It’s Davies’ special skill to take kids who are mostly focused on snacks (Yodels and Ring Dings) and games (Go Fish and Operation) and Xboxes and basketball and get them talking and thinking about warrants and plaintiffs and circumstantial evidence and perjury.

Is justice served in the end? It wouldn’t be fair to tell. But it is safe to share that through the elementary school odyssey of Evan and Jessie, readers of all ages will reflect on the right and wrong thing to do, on when to be trustworthy and how to be honest. The stuff kids think about all the time. Come to think of it, that’s the stuff adults think about, too.