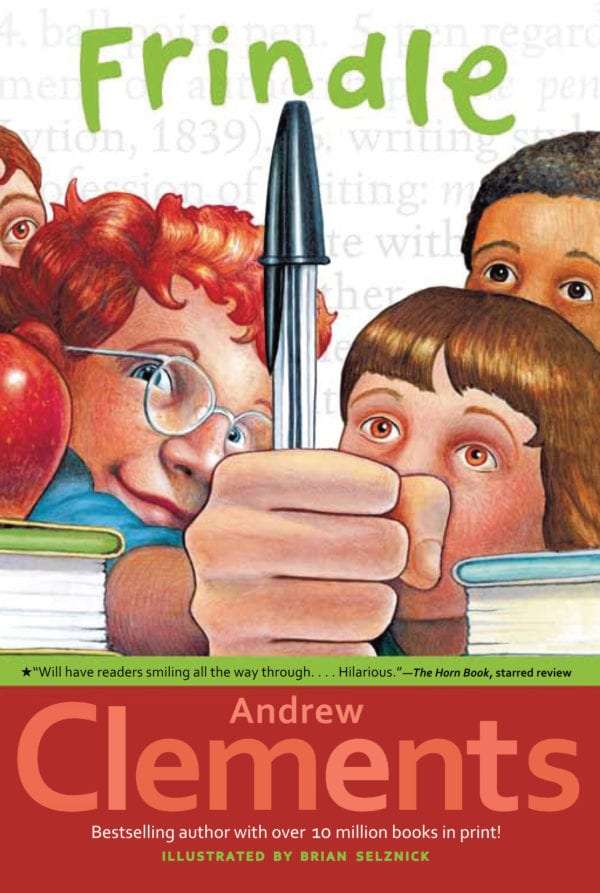 Frindle tells the story of Nick Allen, a kid who “had plenty of ideas, and he knew what to do with them.” So far, his trip though elementary school has been eventful, but fairly trouble-free. Yes, he has implemented some crazy ideas, but he has never really faced a true adversary. Until he arrives in Mrs. Granger’s 5th grade class, and the no-nonsense language arts teacher quickly sizes Nick up as a challenge to her authority. And she does not like a challenge to her authority – at all. At least that’s the way she appears…

The thing Mrs. Granger surely does like is her beloved dictionary. Etymology, grammar, spelling, vocabulary – these are the things that warm Mrs. Granger’s heart. So when Nick asks, “Who says d-o-g means that thing that goes ‘woof’ and wags its tail?” she cheerfully answers, “Who says dog means dog? You do, Nicholas.” From this simple, provocative answer Nick hatches an idea – a creative, irreverent idea to take on the authority of adults.

Nick decides to take the simple concept that words take on meaning by the way they are used and run a grand social experiment. Walking home with his friend, Janet, and pondering the idea of words and meanings, Nick picks up Janet’s dropped pen and says, “Here’s your…frindle.” And so begins the evolution of the word frindle at Lincoln Elementary School. Be sure to read all the way to the end to see just where those frindles take Nick and Mrs. Granger.

Frindle breezily demonstrates why Andrew Clements is such a popular author with elementary school students. He manages to introduce us to Nick, devise and execute a radical social experiment, and leap 10 years into the future for a satisfying denouement, all in 105 pages. Students will be captivated by the slightly devious dramatic action. And, hopefully, teachers and parents can manage the inventive defiance of authority in the book, even if it leads to some challenging questions. Frindle’s brisk pacing will engage adults and children alike with the ethical dilemmas it poses – particularly about the right and wrong way to challenge authority.