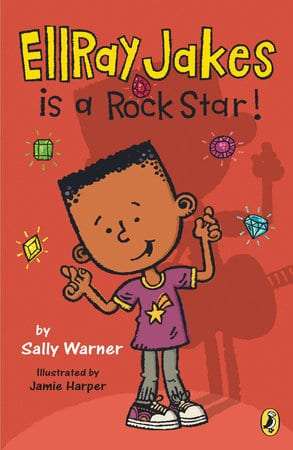 EllRay Jakes Is a Rock Star!

Meet EllRay Jakes, the young protagonist of Sally Warner’s fun, quick-reading series. Meet his parents, sister, and classmates – and take a peek behind the curtain of life in third grade.

In the entertaining second book of the series, we find EllRay in the middle of a common school crisis – popularity. Everyone is bragging about how cool their families are in a bid to climb the elementary school social ladder. EllRay has never been popular. As he puts it, he is “too short to be chosen first for teams, or too bad a speller or mental math guy to win any prizes, or too boring to have an ATV.” Later, gazing at the colorful display of crystals in his geologist dad’s home office, he gets a bold idea for gaining the elusive peer-acceptance he craves. He’ll bring in some of the crystals to show off to his friends – without his dad’s permission. It’s a bold idea, but not a very well-conceived one.

At first, his idea works and he rides the wave of his classmates’ adoration. But, all too soon, the euphoria gets the best of him, he gives the crystals away, and his plan comes crashing down. Now he faces problems at home and at school. In a moment of moral clarity, EllRay takes responsibility for his actions, swallows his pride, and sets about righting the wrong. He tells his dad, “It’s my mess, and I should be the one to fix it.”

Along the way, EllRay learns a lot about himself and his peers. He learns about friendship, and he learns that maybe some people aren’t worth trying to impress. That’s a lot of learning in a slim novel of 116 pages.

Invite your students and families to join EllRay on a brisk ride of personal redemption. This book can be a great first-step into the fun of reading aloud as a family. Or, it can continue the joy with those families already deep into family literacy.