Zetta Elliott and Thomas Taylor Meet Us at The Lamp-Post 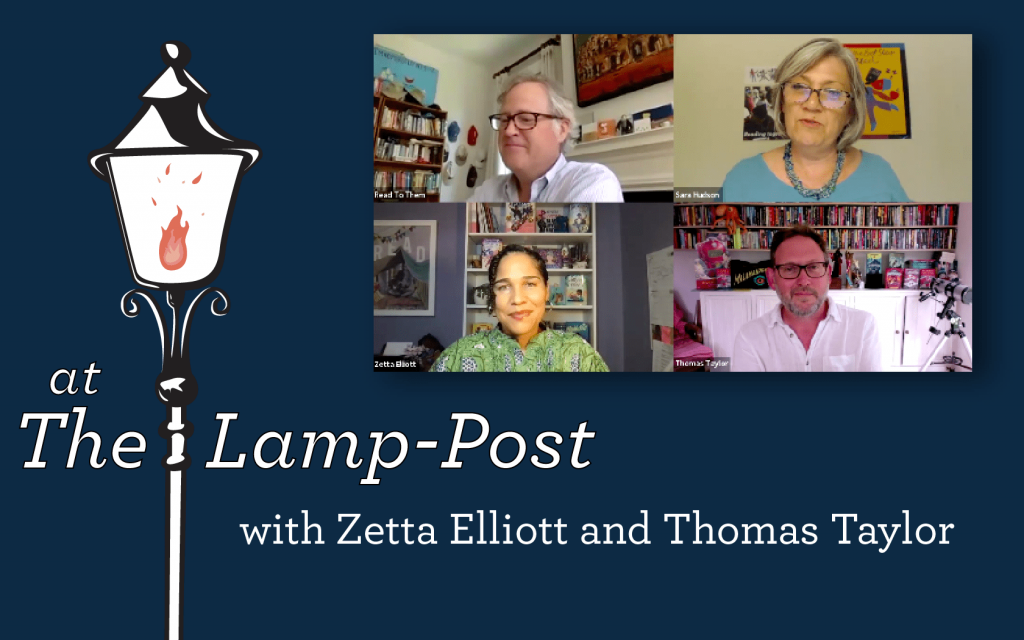 We can’t get enough Fantasy in August at The Lamp-Post.

We learned so much from the authors of the Upside Down Magic series about building a magical school world.

After reading and writing about books based in two other very different magical worlds – Brooklyn and Eerie-on-Sea – we were delighted to have the chance to speak with those authors, too. Both have released three books of their five book series, and are busy working on polishing those last books off.

Zetta Elliott wrote Dragons in a Bag specifically to place diverse characters in the recognizable – yet magical – setting of Brooklyn. Her book displays all of the diversity that can be found in that borough, and touches on the gentrification that is pushing some of that diversity out.

In our interview, Zetta speaks passionately about the importance of presenting these characters and what it means to a new generation of readers to see a wide array of characters access a fantasy world from Brooklyn. She also explains how fantasy provides readers with an opportunity for deeper engagement with reality.

Thomas Taylor wrote the Malamander series to present what he calls “magical mystery stories.” They take place in a curious, spooky, other-worldly yet recognizable place filled with an array of mysterious and outlandish characters like Boat Hook Man and the Mermonkey.

Taylor explains how he conjures his creative characters. For example, there’s a tall, striking man who walks the boardwalk in Thomas’ town who doesn’t realize that he’s the basis for a major Malamander character! Thomas also explains why he prefers fairy magic over wizard magic.

As a bonus, we got to enjoy and unexpected and spirited conversation about book covers!

And both authors share the tricks of the trade for writing a five-book series.

Here are our highlights…

Zetta argues against convention and in favor of decolonizing the imagination.

Zetta and Thomas speak insightfully about their respective book covers…

Zetta reads from Dragons in a Bag…

Zetta explains magic is always about power, not escape…

She wants to counter expectations and inspire new readers.

“There are many, man, many children who know what it feels like to be unsafe and don’t necessarily want to seek that out in fiction but they do want adventure.” (36:30-38:05)

On readers: “I do want to make them feel uncomfortable because that’s the moment when you start to learn.” (39:30…

Bringing history into fantasy “so that kids are able to interrogate the world that they live in.”

And how she wants to empower student readers to be engines of change… (…41:25)

Thomas explains how Fantasy hangs “some interesting sparkly things on the entrance…” to draw readers in:

Fantasy can serve as a mirror: “A mirror that reflects back the reality of the real world.”

And as a prism: “You can look through the prism and see something familiar from a different angle…”

“You can really ask questions about the real world in way that is surprising and arresting.”

Zetta explains how historical places are endowed with magic…
“Those places are automatically magical to me, because they hold…that residue, that trace, that little bit of evidence, evidence of things unseen” (56:20-57:30)

Why Thomas proofs his books by reading them aloud…

He wants to make sure they will be enjoyed by children if or when they are read aloud together.