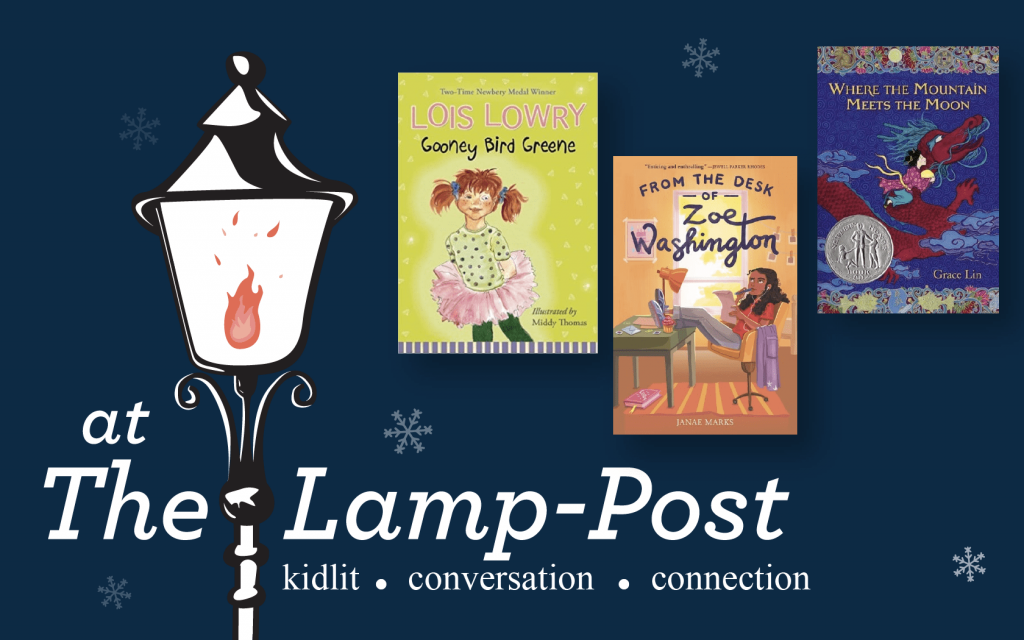 Dr. Rudine Sims Bishop pioneered the philosophy that children’s literature should serve as “mirrors, windows, and sliding glass doors.” Books should allow children to see themselves, see others, and enter new worlds. Thankfully, we are now hearing more and more about the role of mirrors providing representation and validation, and windows building empathy. But, as I think about that framework, I am struck by the doors. Books open those doors, but books also show readers how to walk through them.

From infancy, children learn by watching others around them, first in the home and later in the neighborhood, at school, on teams. Literacy expands that world even farther, allowing children to throw open a wider variety of doors, and to see many approaches to walking through those doors.

For young readers trying to find their own ways of navigating the world, richly drawn characters can act as sextons. Some characters tiptoe through doors, trying not to make any ripples, finding themselves buffeted by the wind and waves. But others, like the girls in our novels this month, chart a course and hold true to it, come what may. They embody persistence, defined as:

firm or obstinate continuance in a course of action in spite of difficulty or opposition.

Well, “obstinate” is in the eye of the beholder. One man’s obstinate is another woman’s fierce determination. Gooney Bird, Minli, and Zoe all model that fierceness for readers of all ages.

Our youngest character, Gooney Bird Greene, beautiful written by Lois Lowry, quite literally steps through the door of her new second grade classroom on the very first scene of the book, ready to grab her share of this new space. 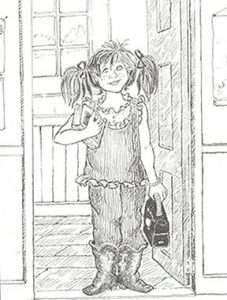 There are lots of books about little girls with big personalities in children’s literature – heiresses to the Ramona Quimby throne. And, sometimes, they all get lumped together as a genre of sorts – the scrappy little girl who gets into scrapes but has a heart of gold. Gooney Bird, however, turns that stereotype on its head. Gooney Bird puts herself into scrapes because she has a heart of gold and shepherds those around her through their own scrapes with the power of her stories. She is the leader who sets the course, opens the door, and marches her cowboy boots right on through with her head held high.

Does misfortune befall Gooney Bird? Of course. See for example How Gooney Bird Came from China on a Flying Carpet. When catapulted out of the back of a moving car in an effort to save her tailless cat, Gooney Bird reacts by giving a TV interview, and filing the story away to become part of her own persona. Gooney Bird is not a person who lets literal bumps in the road derail her from her path of being her own true self.

So, what does Gooney Bird tell us about persistence? Think about young readers meeting Gooney Bird for the first time. They may have met Ramona, or Junie B., or Clementine, each adding a pin in a map of How to Navigate the World. Gooney Bird will show them an entirely different way:  When faced with a new place, put on the clothes that make you feel like yourself and claim your space. By modeling that fierce dedication to her own spirit, Gooney Bird shares some persistence with her classmates, her teacher, and her readers. For our younger readers, Gooney Bird is a concrete example of defining yourself for yourself, and holding true to that line.

Our next model of persistence is Minli in Grace Lin’s modern classic, Where the Mountain Meets the Moon. Minli decides that it is up to her to change the fortune of her family and her community by going to see the Old Man of the Moon. With the encouragement of a talking goldfish, she sets out on this quest, firm in her determination to improve conditions in the Valley of Fruitless Mountain. She does not seek the counsel of her parents because, of course, they would forbid her to go. She knows the space they expect her to occupy within their family – an obedient daughter who helps in the fields, listens to stories, and sleeps under their roof. But Minli has a different vision of her role in the family and the greater community – a provider who can banish her mother’s sighs of discontent. So, she makes a compass in her blue rice bowl, and follows the direction it points – True North.

As she leaves for her quest, she says, “When I come back I will know how to make you happy again!” Fortunately for Minli, she gathers good friends and supporters on the way. But, make no mistake – this quest is hers and hers alone. As she travels, she steps boldly through doors – out of the door of her home, into the secret entrance into the Inner City of Bright Moonlight, and through the circular opening to the Old Man of the Moon.

However, persistence should not be confused with recklessness. When Minli finally reaches that round door and the Old Man of the Moon, he cautions her:

“Every ninety-nine years, someone comes here with their questions. But I will answer only one. So choose your question carefully.”

Minli launched her journey to bring happiness and good fortune to her family. And she could have marched through the gate and demanded an answer from the Old Man of the Moon on how to bring that fortune. Instead, her quest has taught her much about the world outside her own front door. When Dragon asks why she didn’t seek the answer to how to change her family’s fortune, she responds, “I didn’t ask the question because I don’t need to know the answer.” It seems fitting, therefore, that when the goldfish man returns to Minli’s village, he is sent to a set of doors, ornately decorated with pictures of lucky children. Through those doors, he finds a thriving community, a happy family brimming with good fortune, and a girl gazing up at the moon.

Janae Marks’ debut novel, From the Desk of Zoe Washington, takes Minli’s quest to benefit her family and brings it to modern times for a contemporary middle schooler. Zoe receives a letter from her incarcerated father on her birthday, her first contact with a man she has never known. Until that point, she has worried about typical middle school concerns – problems with her long-time best friend, a long summer stretching in front of her, and her ambition to be a pastry chef. But, when that letter lands in her hands, she suddenly has bigger concerns. She wants to establish a relationship with Marcus and, as she learns more, she becomes determined to clear his name.

At first, her grandmother supports her efforts to communicate with Marcus, providing Zoe with a role model of persistence. Grandma knows that Zoe’s mother would not approve, but she sticks to her principles. Later, though, the quest to find the alibi witness will come down to Zoe and her steadfast friend, Trevor. Zoe faces that perennial dilemma, saying to herself, “But maybe it was okay to do something wrong if you were doing it for the right reason.” Despite her misgivings and real obstacles, Zoe knows that building this relationship with Marcus is the right thing to do, so she holds her course.

The perhaps ill-formed plan to confront a possible alibi witness brings Zoe and Trevor to the office door of Dr. Susan Thomas, a math professor at Harvard. At this pivotal moment, Zoe – like Minli – slows down a bit.

“I opened the door carefully, like if I did it too fast, the person on the other side would disappear.”

But open it she does, and opening that door is the key to finding the truth. The rest of the quest is not that simple, though. As was bound to happen, Zoe and Trevor’s fragile cover story unravels. The car door slams after Trevor’s mom sees them get out of the taxi. The front door slams as Zoe’s mom comes home to learn the whole story. And, the laptop slams shut on Zoe’s hopes of uncovering Marcus’ alibi.

As it turns out, though, Zoe’s fierce determination ends up softening her mother’s own resolve. The 12 year old has taken this quest as far as she can, and her persistence opens a space in her mother so she is ready to face some hard truths about Zoe and about Marcus. In the end, Zoe needs her mother and stepfather’s help to free Marcus, just as they needed her help to see the path ahead of them.

Zoe’s dream toward the end of the book is a metaphor for her journey:

“I dreamed of Marcus sitting alone in his prison cell at the end of a long hallway. I tried to run to him, but every time I got close, the hallway would stretch out even longer and I’d have to start running all over again.”

Zoe persists down that long hallway in her quest for the truth about Marcus. Her determination finally pays big dividends, in establishing a new closeness with her father, in winning his release, and in carving a new role for herself in the family.

Now, do we want young readers to lie to their parents and dash off to another city like Minli and Zoe? No, we do not. But any young person taking those first steps into practicing persistence is going to make mistakes. And, there’s the beauty of characters like Gooney Bird, Minli, and Zoe. They show kids, in the safe environment of a book, how stepping through those doors might work out. They give readers the chance to play out the string, equipping them with all of the learned wisdom of these characters, before facing similar dilemmas in their own lives. Readers learn that persistence sometimes comes with mistakes and costs, helping them to evaluate their own course of action and, ultimately, their own true selves.

There is a popular Shirley Chisholm quote that speaks to the persistence she embodied in her time. It is still valuable to readers in our time:

“If they don’t give you a seat at the table, bring a folding chair.”

Women like Shirley Chisholm start out as little girls like Gooney Bird, asserting her way into upending her second grade class. They become older girls like Minli and Zoe, taking steps through more challenging doors that they open themselves. These three characters support young readers as they learn how to walk through their own doors and assert their own seat at the tables they choose.