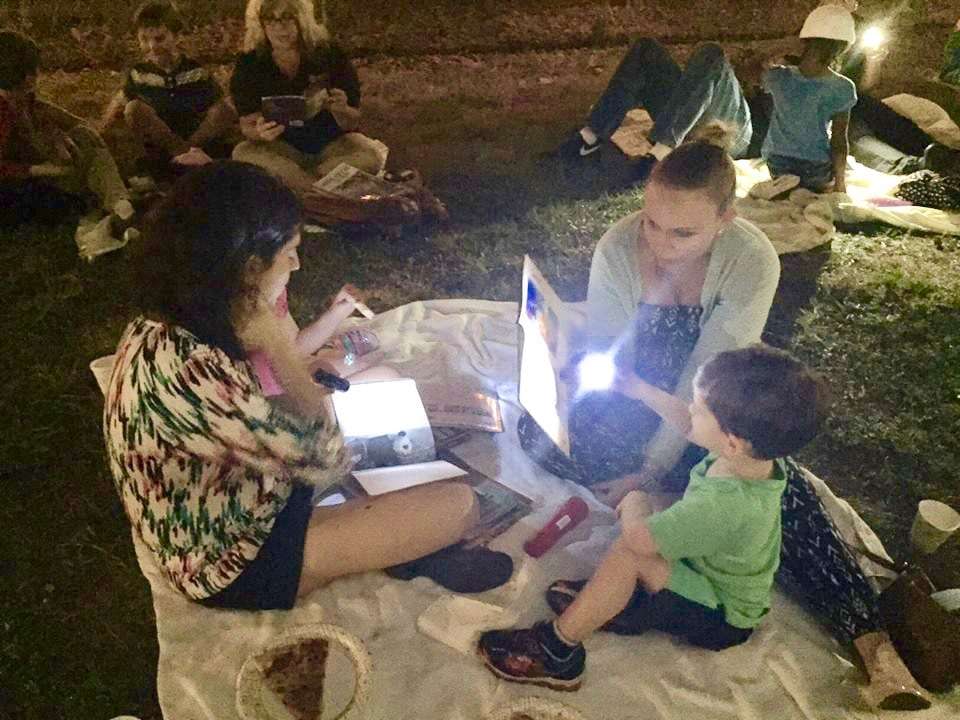 Congratulations to North Shore Elementary School in St. Petersburg, Florida, Read to Them’s 2016 One School, One Book School of the Year. North Shore’s success are largely due to the expansive efforts of Sally Baynard, the director of North Shore’s Gifted Program.

Sally brought OSOB to North Shore in 2015 when they read Kenny & the Dragon. Her community responded so well that Sally expanded her efforts. She spread OSOB to neighboring Bear Creek E.S. In 2016 North Shore read Charlie and the Chocolate Factory while Bear Creek read The World According to Humphrey. Sally also organized an impressive ‘Knight’ of Reading Under the Stars – a family reading event with books, food, instruction, and games which culminated with a picturesque evening read – families arrayed on the school grounds, sitting on grass and towels reading together in twos and threes by flashlight and candlelight. You can check out the video here.

Sally also delivered a presentation on One School, One Book – the method, the strategy, the results, and how it was implemented at North Shore – to the Florida Association for the Gifted (FLAG) convention. Literacy leaders like Sally, who share and explain their experiences with One School, One Book and family literacy, are a principal reason OSOB continues to expand across the continent. When successful schools share their enthusiasm with other schools, districts, and educators, family literacy grows and establish reading habits in each community.

We join and salute Sally and North Shore for helping to create a culture of literacy in every home. Congratulations North Shore Elementary School!

This year it was harder than ever to select a single OSOB School of the Year. There are many schools that have achieved dramatic gains in family literacy – one way or another – in a variety of locales, employing a variety of innovative techniques to trumpet and spread a culture of literacy. Here are five honorees from 2016…

Oak Grove-Bellemeade E.S. in Richmond, VA – Under the leadership of Jessica Carpenter, Oak Grove-Bellemeade has moved, in the space of three years, from one spare title to reading three books a year – two years running. Oak Grove-Bellemeade represents a merger of two challenged schools on Richmond’s Southside so their achievement is particularly impressive. Oak Grove-Bellemeade has now read 7 titles together in the span of 27 months – including two over the summer. Jessica and her growing team are working overtime to establish a culture of literacy in a challenging environment – and their efforts are bearing fruit: Jessica reports students regularly coming up to her and asking, “Mrs. Carpenter, What is our next book going to be?”

St. Joan of Arc School in Chagrin Falls, OH – St. Joan of Arc, in their very first year, produced a remarkable series of enthusiastic assemblies and related events as they read The Cricket in Times Square. They posted fabulous pictures of their introductory assembly (which featured colorful aspects of Manhattan and Times Square) on Facebook, sang during the 7th inning stretch at the Cleveland Indians Opening Day baseball game, entertained members of a local municipal string quartet, involved 8th grade graduates of the school, included infographics and live crickets in their school, and even invited Sensei Sam to teach the students about martial arts. The Cricket in Times Square provides manifold opportunities for enrichment and St. Joan of Arc seemingly took advantage of every one. Parent co-ordinator Terry Kernicki provided Read to Them with awesome documentation of the fabulous response their efforts garnered from students of all ages.

Colerain E.S. in Colerain N.C. – Colerain also read three books in one year. They didn’t plan it that way, but this high poverty school in tidal North Carolina read Because of Winn-Dixie in the fall and had so much fun they had to keep going. So they read The One and Only Ivan in the winter. That was so good it bred a hunger in their students and families that two books could not sate, so they re-upped again and read Charlotte’s Web in the spring. They even had a full-fledged baby pig at their assembly! Reading three books in one year, especially with a challenged student population, is the best way to instill the habit of reading aloud together in every home.

Hats off to Jane Addams E.S. in Melrose Park, IL – The very first One School, One Book school in an admittedly challenged region of the country, Jane Addams was the sole school in Chicago able to pull off OSOB in 2016. They read The Lemonade War and designed and executed Lemonade War Jeopardy between students and parents and teachers. Principal Ruth Martini-Walsh and her team are to be commended for pioneering OSOB in Chicago.

Windemere Park Charter Academy in Lansing, MI – Windemere Park read The BFG – before Steven Spielberg’s movie came out this summer. And what a time they had! Library Technical co-ordinator Angie Moore Tweeted details of their experience voluminously. You can see the details here on Twitter. Angie documented all of Windemere Park’s enthusiasm and also found numerous other stories and personal statements of enthusiasm for The BFG and reading aloud with children.