Celebrate National Poetry Month with Read to Them! 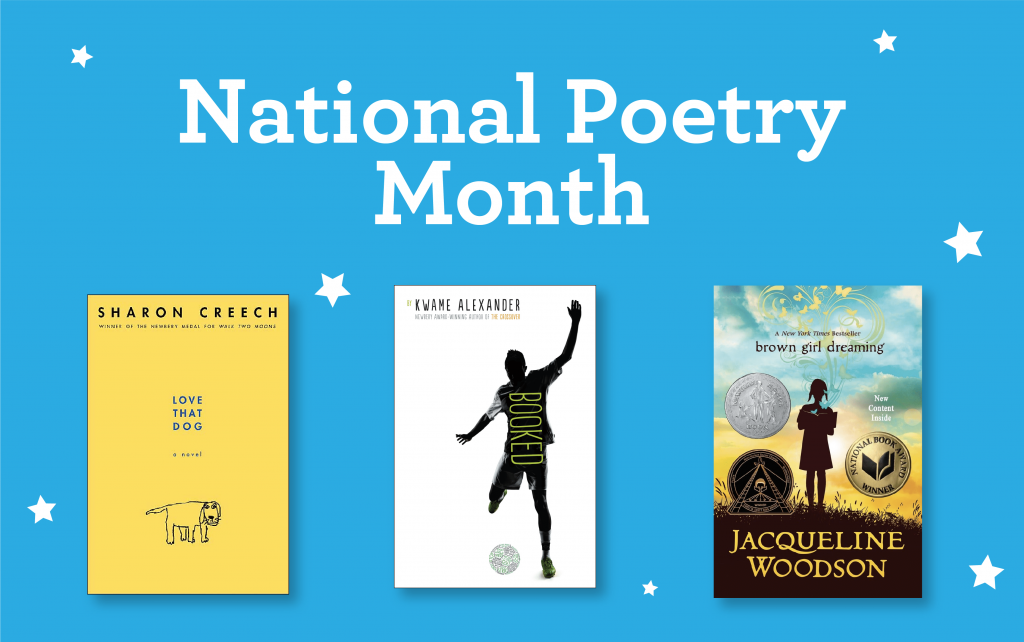 Each April, National Poetry Month gives folks the opportunity to celebrate the importance of poetry and the poets whose works actively enrich our lives. Like any creative genre, poetry includes a plethora of themes and terminology to introduce to students. Poetry also presents a wondrous opportunity: the chance to build a bridge between reluctant readers and a love of books.

How can that bridge be poetry?

If you peer back through the door of childhood, it’s likely you memorized a nursery rhyme or six. Twinkle Twinkle Little Star? The Itzy Bitzy Spider? How about Hey Diddle Diddle? (Just remembering these titles, you probably have more than one of them stuck in your head.) They’re short and their simple rhyme scheme makes them easy to recite and recall even years later.

For many of us, nursery rhymes naturally gave way to the witty, nonsensical tales of Dr. Seuss. From Green Eggs and Ham to The Cat in the Hat, to One Fish, Two Fish, Red Fish, Blue Fish and even Oh, the Places You’ll Go!, each is widely accessible in and out of the classroom. Children continue to love these books for their blend of sensibility and silliness, and may not even realize that Seuss’s playful rhyming and repetition helps develop speech and language skills. Seuss’s works also allow children to let loose with their vocabulary acquisition through creating new words like “yuzz-a-ma-tuzz” and “zizzer-zazzer-zuzz” in a delightful sort of nonsense that’s sure to twist the tongue.

The first real foray into poetry that kids are likely to have is with Shel Silverstein, known for The Giving Tree, Where the Sidewalk Ends, and Falling Up. Like Dr. Seuss, Silverstein’s poems welcome kids into a world of quirky characters and outlandish tales. The prose is simple and straightforward, with ample joy and heart, too. There’s also a sense of respect woven through Silverstein’s work, an understanding that children need silliness and to have their unique view of the world honored. Take his poem, “Thumbs” for example:

May look wrinkled and wet

And withered, and white as snow,

But the taste of a thumb

Is the sweetest taste yet

(As only we thumb-suckers know).

There’s undeniable childlike humor, yes, but it doesn’t insult a reader’s intelligence in the slightest. What all of these examples do best, though, are pique interest. Bigger than that – these forms are short, making them easily digestible to even the most bristling of readers.

You can throw even the most compelling of chapter books at a reluctant reader, but the amount of words on the page are still going to spook some of them. But  kids who may shy away from a seemingly dense novel may be able to gravitate towards the ample white space around poetry stanzas.

Jason Reynolds – whose novels Ghost and Look Both Ways are available in Read to Them’s catalog– recognized this in a 2017 interview with PBS.

“For some kids,” Reynolds says. “Those words – the amount of words – is equivalent to a snarling dog. So, why not start with the less threatening, palm-sized pup in the [pet store] window? In this case, poetry.”

But the power of poetry – and poets! – is that in spite of this white space, thanks to deft, careful word choice, a single poem can hold the punch of a full-length story.

“With the incredible selection of poetry and novels and verse from past to present,” Reynolds claims. “This is an opportune time to use them to chip away at bibliophobia… And once young people experience turning those pages, once the rush of comprehension and completion laps at their psyches for the first time, perhaps they will know they need not fear a thing created to love them, and for them to love.”

Read to Them has a number of novels in-verse as well as novels where poetry plays a major role within the text*. We invite you to use them as your building blocks for exploring poetry with readers of all ages. Check out the list below: 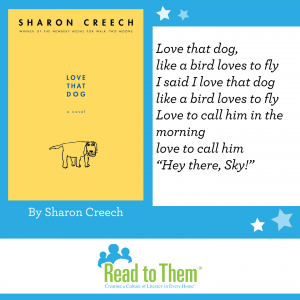 Love that Dog by Sharon Creech – Jack (the protagonist) doesn’t think he can write poetry – because that’s what girls do, not boys. This initial objection, however, is written in the form of a poem, as is every entry that follows. But as Jack’s poetry unit goes on, he finds himself inspired by the work of Walter Dean Myers and decides to write a poem of his own about his dog. Sharon Creech’s short, stunning stanzas beg readers to slow down and appreciate the beauties of poetry beyond the month of April. 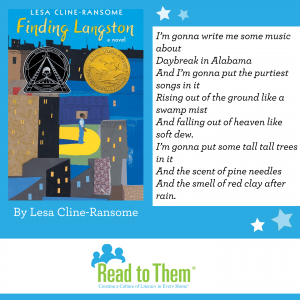 Finding Langston by Lisa Cline-Ransome – While this isn’t a novel in-verse, the role of poetry is essential. Young Langston, who has just moved from Alabama to Chicago in the wake of his mother’s death, discovers the poems of his namesake – Langston Hughes. Readers will find themselves just as touched by Hughes’ poetry as young Langston is, and may just find a narrative window into their own lives, too. 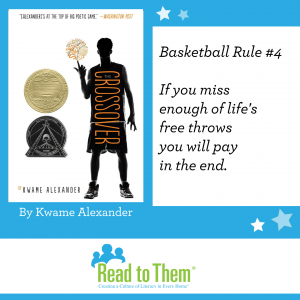 The Crossover by Kwame Alexander – This Newbery Award-winning novel-in-verse brings readers to the basketball court, and into the lives of twin brothers, Josh and Jordan. When the bond between the brothers begins to unravel when Jordan meets a new girl in school, readers will find that the playbooks of basketball and life have more overlap than they might have thought possible, while Alexander’s poetry dazzles on the court and off. 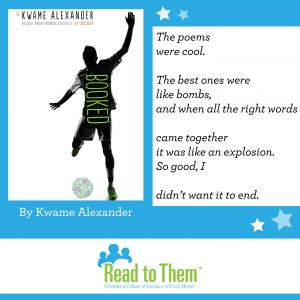 Booked by Kwame Alexander – Nick is just like any other young teen: he loves soccer, he’s got a crush, and he’s trying to figure out what his future holds. However, when the dependable stability of Nick’s world starts to flounder, he finds himself struggling to stay afloat. Alexander’s poems briskly propel readers through the highs and lows of Nick’s life as he finds solace and solutions, even (unexpectedly) from the books recommended by a teacher who visits him in the hospital! 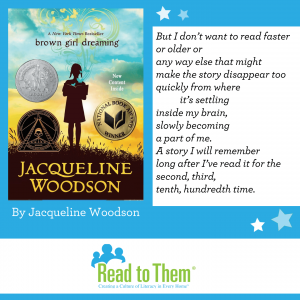 Brown Girl Dreaming by Jacqueline Woodson – This memoir-in-verse paints a rich picture of the Ohio, South Carolina, and Brooklyn of Jacqueline Woodson’s youth. Woodson steadily finds storytelling to be an essential part of herself, one that she is eager to share with the world. It’s a fully-realized dream, one that Woodson relays in gorgeous, varied, and layered poems that are sure to inspire readers to delve into their own sense of self-expression. 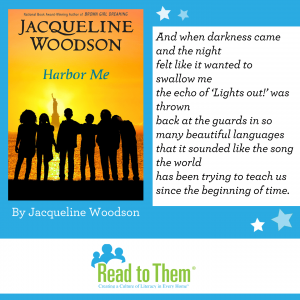 Harbor Me* by Jacqueline Woodson – Step into the ARTT Room – A Room to Talk. Though there are six middle school students featured in Harbor Me, the heart of the novel lies with Esteban. His father, who has been deported, shares poetry with Esteban that he translates into English to share with his friends. Using these poems as stepping stones, this unforgettable group of six is able to elevate their own feelings, stories, and secrets. 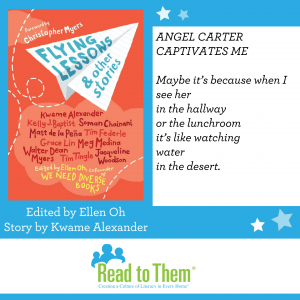 Lessons, and Other Stories* by Ellen Oh – Among the small wonders of this collaborative work, you’ll find Kwame Alexander’s novella-in-verse, “Seventy-Six Dollars and Forty-Nine Cents.” This series of 31 poems introduces readers to Monk, a twelve year old boy who, in the wake of a car accident, develops the ability to read people’s minds. Dive into Alexander’s beautiful free verse (and one haiku) and get a taste of rhyme and anaphora, too! 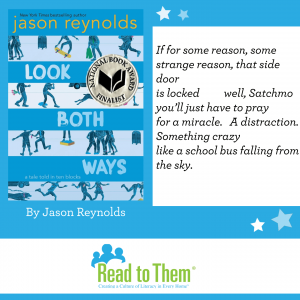 Look Both Ways* by Jason Reynolds – Jason Reynolds masterfully guides readers through the lives of ten neighborhood kids as they leave school. Everyone has a different story to tell, and each is more complicated than it first appears. During Satchmo’s story, Reynolds employs a free-verse poem that brilliantly captures Satch’s anxiety about walking past a house with a ferocious dog. Readers will find each empathetic, humorous, and profound thread is woven into a lush quilt of interconnectedness.