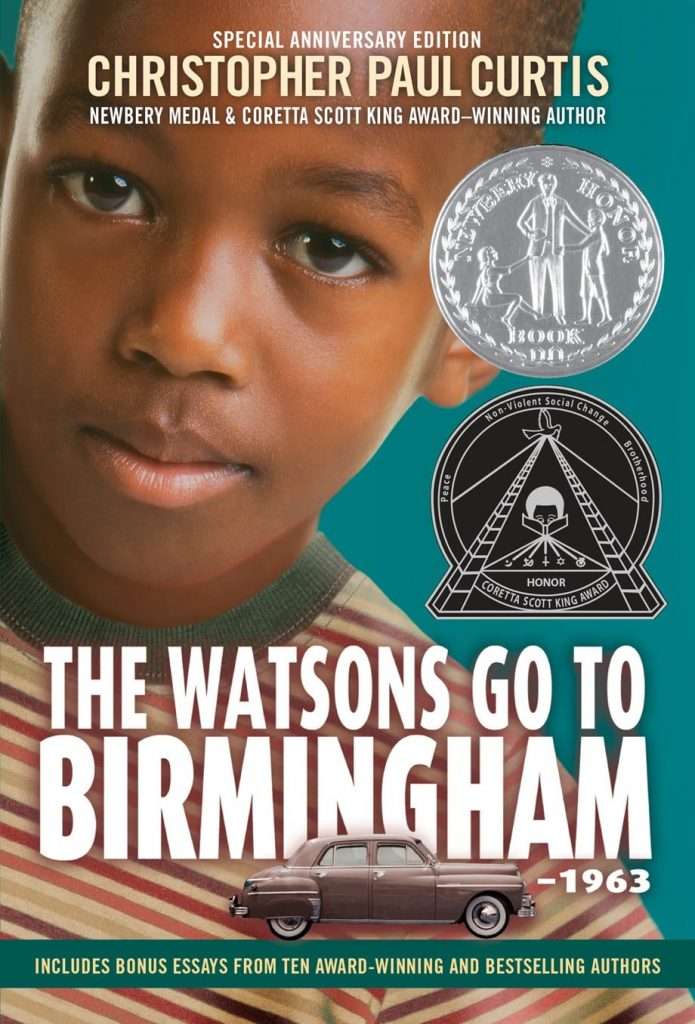 The Watsons Go to Birmingham—1963

Watsons Go to Birmingham – 1963 is Christopher Paul Curtis’ Newbery Honor and Coretta Scott King Award winning novel of a family’s life in Flint, Michigan and their summer journey to Birmingham, Alabama.  They take the trip in an effort to get the oldest child, Byron, to straighten up, hoping that a summer with Grandma Sands will be just what the mischievous Byron needs to mend his ways.

The first 180 pages of the novel revolve around the Watson family’s life in Flint. Kenny is the younger brother and the narrator of the story. Unlike Byron (and his no-good sidekick Buphead), Kenny works hard in school, earning the nickname “Poindexter.” There is a sister, too, the baby of the family, little Joetta. They fondly refer to themselves as “the Weird Watsons,” and Kenny relates a series of funny vignettes in Flint like getting frozen to the car side mirror, getting sick from too many ill-gotten cookies, and getting cheated out of your beloved plastic dinosaurs.

Then the Watsons set off on the long trip to Birmingham in the family car, The Brown Bomber. To prepare for the trip, Dad equips the Bomber with “the True-Tone, AB-700 model, the Ultra-Glide,” a record player for the car. Now this might sound impossible, but don’t worry because as Dad explains, “the vibration problem has been overcome by the exclusive Vibro-Dynamic-Lateral-Anti-Inertial Dampening system.” Really!

When they arrive in Alabama, no-nonsense Grandma Sands lays down the ground rules, but there are plenty of adventures to be had and good food to eat. The summer takes a terrible turn, however, when the real events of Birmingham in 1963 overlap with the fictional Watsons. The family is scared that Joetta is in the 16th Street Baptist Church when it is bombed, resulting in the deaths of four little girls. She isn’t there and she is safe, but the experience traumatizes Kenny. His family returns to Flint, not sure how to help him. Surprisingly, it is Byron who finally breaks through to Kenny, allowing him to cry it out and then setting him straight. While this series of events is only a small fraction of the book, it can open the door to frank, constructive conversations about history, fairness, and the distance left to go to equality.

Christopher Paul Curtis is a master storyteller, weaving together hilarious turns of phrase with poignant moments of real depth. Families and schools sharing this story will have plenty to discuss and learn from Kenny, Grandma Sands, and even wise-cracking Byron.