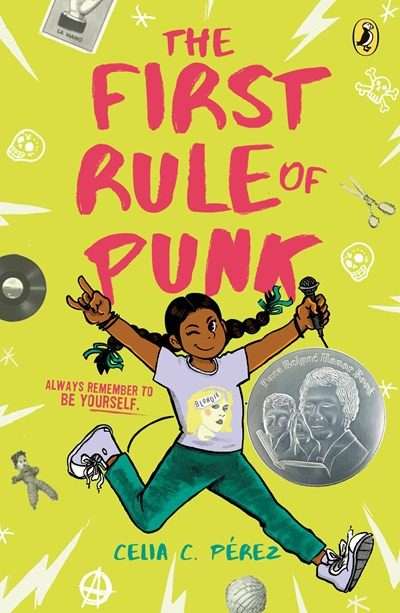 The First Rule of Punk

There’s a lot to know about Maria Luisa, better known as Malú, but let’s start with this: she loves punk music, she loves to make creative zines, and she hates cilantro.

Malú’s father runs a punk record store in Florida, while Malú and her mother – whom she teases as SuperMexican – are temporarily moving to Chicago. Like many a middle school student, Malú is figuring out who she is, who she wants to be, and how she wants to present herself to the world. (Answer: Punk, not SuperMexican.)

This view of herself puts her in conflict with her Mom, with a mean girl at school, and with her school administration. Malú is a winning champion because she finds such constructive ways to deal with these overlapping challenges.

She investigates herself and re-builds her confidence in her creative zines, which are shared liberally throughout the book. She finds a core of friends, and forms a band with them. Though teased by some as a “coconut” (brown on the outside, white on the inside), she turns that into a badge of honor by naming the band The Co-Co’s. When the band is not accepted for the school talent festival, Malú and her friends set up an Alterna-Fiesta, the most punk thing of all. When Malú and her band are trying to figure out how to make their performance stand out as innovative and original, she takes an old standard from one of her mother’s traditional favorites, “Cielito lindo,” by Lola Beltran, and adds the perfect punk touch to make it their own.

Malú and author Celia C. Pérez present punk as not just a way of challenging authority. While Malú does rebel against the restrictive school dress code, but both she and her father focus on punk as a way of finding strength, being yourself, and being welcoming to others. As her dad tells her,  “…being punk was about being open-minded and…giving people the benefit of the doubt.”

A grandmother figure in the book, Señora Oralia, says to Malú and her friends, “I don’t understand why you kids try so hard to stick out.” But Malú demonstrates that punk is really about finding yourself, appreciating where you come from, and asserting yourself with constructive confidence.

At Read to Them, we strive to offer an array of books that reflect the richness and diversity of the schools we serve. For Hispanic

Our July Book Stack is recognizing, appreciating, and exploring books in the Read to Them library that incorporate the element of play, our at The 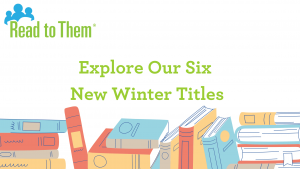 Read to Them is proud to share six new winter titles that have been added to our catalog. We invite you to take a look