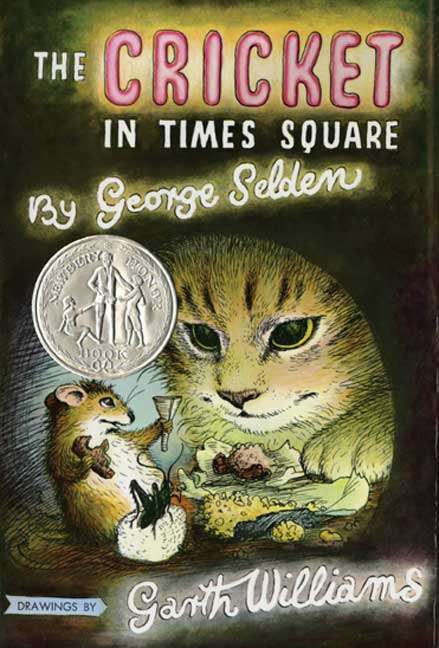 The Cricket in Times Square

“Rejoice, Oh New Yorkers—for a musical miracle has come to pass in our city!… Ah, music lovers, you will never guess. It was a cricket! A simple cricket…that is able to chirp operatic, symphonic, and popular music. … You will find him in the newsstand run by the Bellini family in the subway station in Times Square.” — H.P. Smedley, New York Times

The Cricket in Times Square is a heartwarming tale of friendship that won the Newbery Medal back in 1964.

Harry Cat and Tucker Mouse are scrounging partners. They live in the Times Square subway station in New York City. When Chester Cricket arrives from Connecticut, they take him under their wing and show him how to get along in the busy subway station.

Chester also comes to the attention of a boy, Mario, and the Bellini family who run a newsstand in the station. Mario makes a special bed for Chester out of a matchbox. Mario also listens to all kinds of music on a transistor radio, and it is this music that transforms Chester Cricket and his array of subway station friends.

Chester plays music for himself, his friends, and the Bellinis. And he plays for the many, many passersby. Naturally he becomes famous as the cricket who can play opera tunes which echo off the walls of the station well underground. He even comes to the attention of the music critic for The New York Times.

But what animates The Cricket in Times Square are the things Chester’s friends are willing to do to protect and care for him. In one well-known sequence, Mario ventures to Chinatown and procures an old pagoda-shaped cage from the proprietor, Sai Fong, to be the new palatial home for Chester Cricket.

There were seven tiers to it, each one a little smaller than the one below, and it ended in a slender spire. The lower parts of the cage were painted red and green, but the spire was golden. At one side was a gate with a tiny latch on it. Mario wanted to own the cage so much that he tingled all over.

Sai Fong tells Mario the legend of the first cricket and how, to the gods, the “beautiful song of cricket is song of one who still speaks truth and knows all things.”

It is that music that inspires both characters and readers to love the sweet charms of The Cricket in Times Square. Good friends, generous and steadfast, scrounging together. And sweet truthful music. Discover its age-old charms for your students, your families, and your communities.