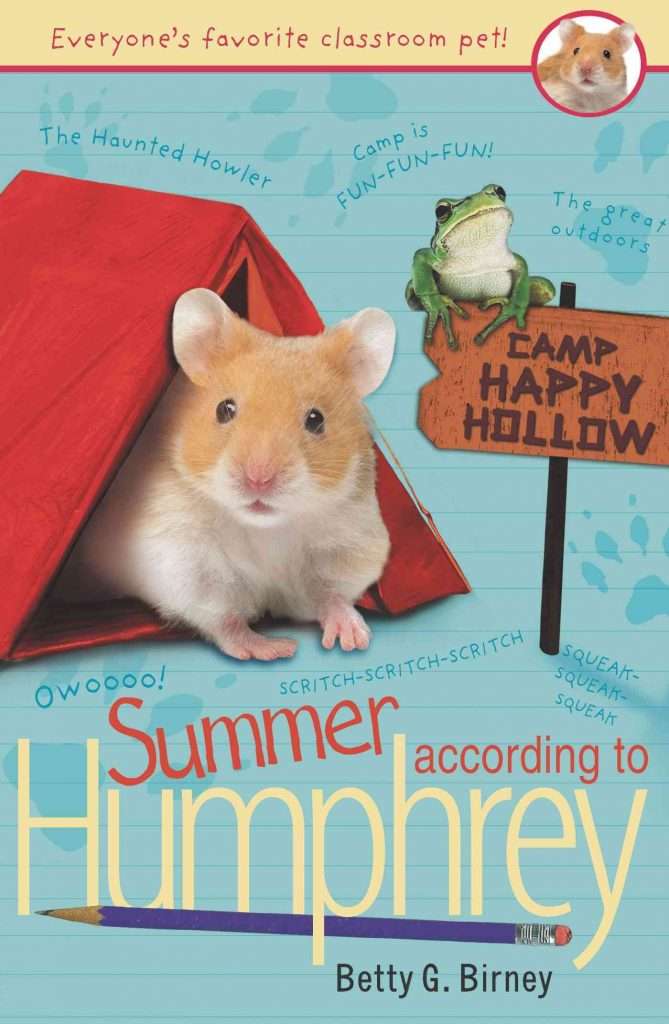 Summer According to Humphrey

Humphrey is back in his 6th Betty Birney adventure and Read to Them is proud to offer it as another recommended Humphrey title – along with a complete suite of of activities, trivia questions, and assembly ideas.

Readers have asked for more Humphrey, so we’re happy to keep ‘em coming. Schools continue to impress with fantastic assemblies including Aldo the Custodian monologues and hamster calisthenics.  That just shows you how much consistent excitement the little hamster, everyone’s favorite classroom pet, continues to generate.

What’s new here in the Summer? Humphrey goes to summer camp. Og, the frog, too. At Camp Happy Hollow he encounters people – and animals – both old and new. It is of course through the new characters that Humphrey learns new lessons and enlarges the perspective of his readers. (As all good literature should.)

Humphrey notices the different smells of Nature. He observes the different behavior of the adult counselors. (He hates Mrs. Wright’s shrill whistle.) He notices which campers are being nice to each other and which aren’t.  He takes special note of which campers are unhappy, and of course he dives in to help. That is the secret of Humphrey. He is everyone’s favorite sly, secret counselor.

He also meets some new animals at Camp Happy Hollow. A rescued bird. A rescued snake. And he’s especially curious about the mysterious animals who make the scritch-scratch sound underneath the cabin floor. They turn out to be mice – including a girl named Goldenrod, and two friends named Lucky and Go-Go. Betty Birney exercises a light touch here. These new friends don’t occupy major plot lines. Humphrey is still focused on the psychological lives of the children in his life. But the mice do broaden Humphrey’s understanding of the world, offering different ways to think about being captive and being free, and helping along at one crucial plot point.

Every Humphrey book provides different context, and in Summer According to Humphrey, the empathetic hamster ends up in the middle of the Clash of the Cabins and even Comedy Night. Students and families reading Summer According to Humphrey will feel like they are at summer camp, too. And schools that adopt Summer can create a camp atmosphere with activities that mirror or extend the camp activities in the story.

So bring summer to your school. Venture to Camp Happy Hollow with Humphrey and Og, Aldo and Ms. Mac, and Golden Miranda and Know-It-All Noah. Whether it’s your first Humphrey book or your fourth, discover or return to the wisdom of Humphrey, and explore why it’s true: “You can learn about yourself by taking care of another species.”