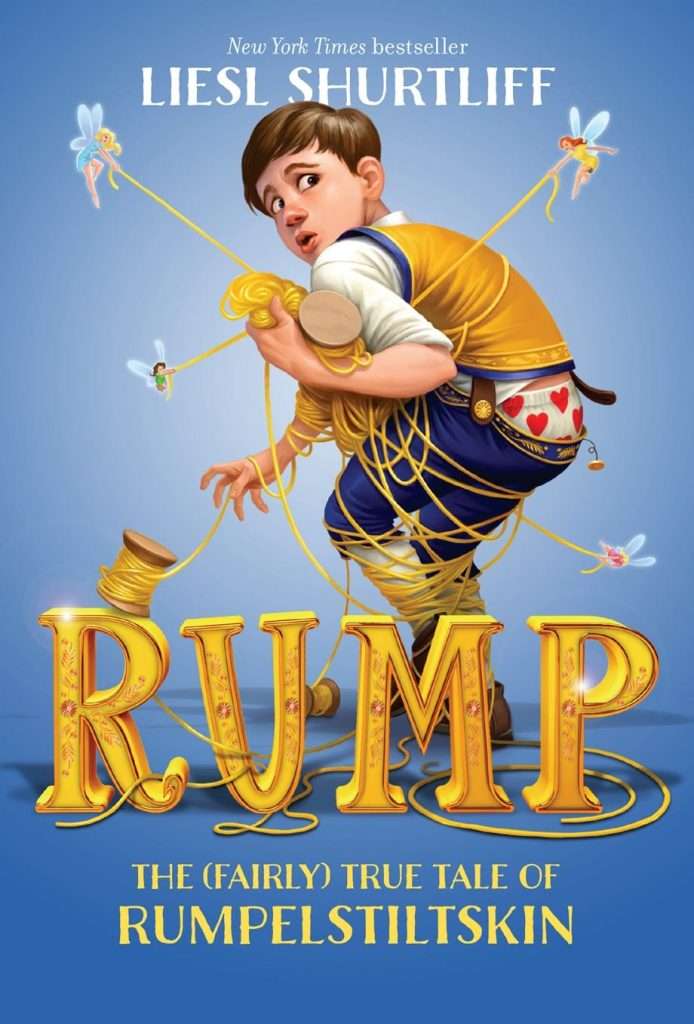 We invite readers to revisit, rediscover, and rethink what you know about fairy tales with Rump: The (Fairly) True Tale of Rumpelstiltskin. Author Liesl Shurtliff presents the story-behind-the-story of the fabled Rumpelstiltskin, pulling back the curtain to reveal the truth behind his famed ability to spin straw into gold, and the heavy price that ability exacts. Rump is the first in her series of fractured fairy tales, and students will be primed to jump into the rest after enjoying Rump.

“My mother named me after a cow’s rear end.”

That’s the first sentence. Do you feel sorry for Rump? Or do you laugh at his name? Shurtliff establishes a back-and-forth tension between sympathy and humor that immediately earns the reader’s empathy and trust.

Every aspect of Rump’s life is tangled…his family, reputation, finances, and friendships. He has his beloved Gran on his side, and they share funny rhymes to lighten the load of their dire circumstances. As Rump says, “Life would be awfully grim and glum if I couldn’t laugh at myself.”

And, while Rump uses humor to face his challenges, there are deeper, more complex forces at work. He is cursed by his name because in his kingdom, your name is your destiny. What kind of destiny comes with a name like Rump? When Gran’s death leaves Rump with even more questions, he sets out on an odyssey to untangle his life and find some answers.

That journey introduces readers to a wide array of characters, including a bullying king, some gentle ogres, pesky pixies, a hot-headed friend named Red, and some witches who weave and knit magically beautiful textiles. Thread by thread, Rump untangles the story of his life, his name, and his destiny.

Shurtliff’s clever retelling presents a springboard for moral discoveries and points to ponder. Why do bullies terrorize others and what can be done to stop them? Should children bear the burden of their parents’ mistakes? How can humor help in times of distress? Is destiny foretold or do we make our own? And what is the best way to escape a swarm of gold-loving pixies? All from a fairy tale! Albert Einstein is often quoted as saying, “If you want your children to be intelligent, read them fairy tales. If you want them to be more intelligent, read them more fairy tales.” Rump invites families to look at fairy tales in a new way. (And maybe return to the originals, too.)

The Chocolate Touch by Patrick Skene Catling Young John Midas relives the legend of King Midas – via chocolate! – and learns the lesson of moderation