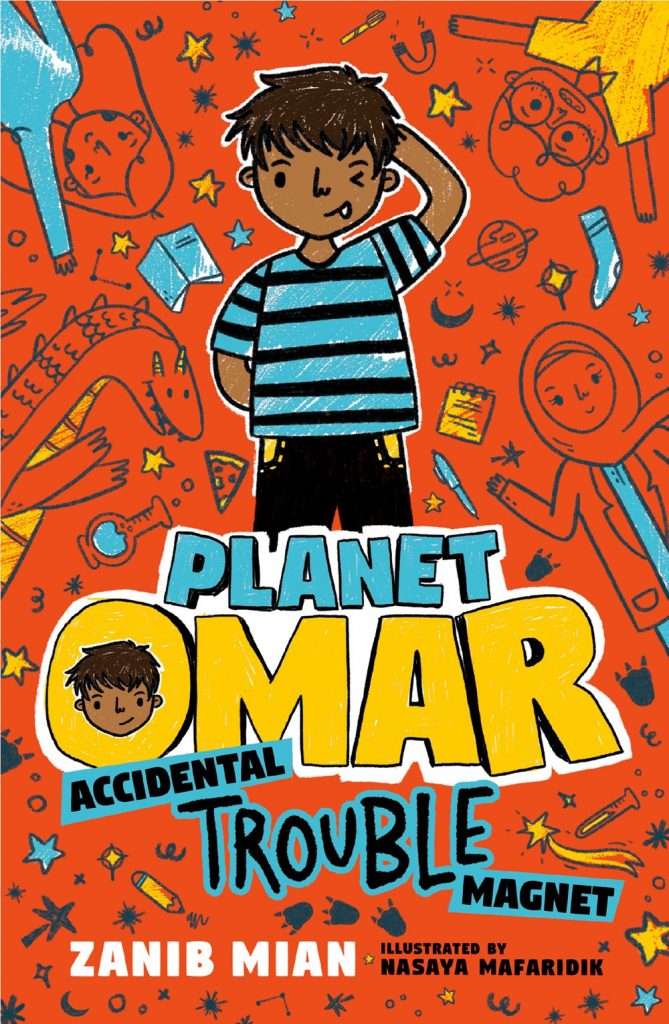 Set in London, the Planet Omar series brings to life the vivid imagination of a 9-year-old boy facing a new school year at a new school. Thanks to Zanib Mian’s witty writing and the fully integrated illustrations by Nasaya Mafaridik, this book moves briskly with plenty of laughs – and lessons – along the way.

The son of two scientists, Omar is stuck between a rambunctious little brother and a newly-snarky teenage sister. Together the family does experiments on Science Sundays, worships at the London Central Mosque, and has all the sibling shenanigans the parents can handle.

The thought of getting into the car made my tummy feel like there were a million frogs hopping around in it, just waiting to leap up my throat. So I took a deep breath and imagined a better way to get to school…on a super awesome, magnificent DRAGON!

Omar sets off for his new school filled with the normal new-kid anxiety, amped up by his runaway imagination. Instead of just worrying that his new teacher will be strict, he is worried she will be a space alien. He calls on his imaginary dragon named H2O to give him courage, or at least some distraction.

Once he arrives at school, he finds – of course – that his teacher is not an alien, but a nice lady with very expressive hair. And there is a new “super-best friend” Charlie. School would be great, except for the class bully, Daniel, who tells a shocked Omar, “You better go back to your country before we kick you all out.” (Omar has always lived in England – you can imagine his confusion!) But when Omar and Charlie get lost on a school field trip to the Science Museum, Omar chooses to be the bigger person and helps Daniel be brave.

Planet Omar expands the world of funny new kid books by putting a Muslim family at the center. We gently learn about Muslim culture through a 9-year-old’s eyes. Omar dreams of getting a Ferrari as his prize for fasting during Ramadan and cringes when his little brother blows a whistle during prayers at the mosque. We also see a neighbor have a change of heart after experiencing the kindness of Omar’s family, eventually joining the family for an Iftar meal.

For all the hilarity of dragons and Ferraris, Omar leaves us with some real wisdom.

One thing I’ve figured out is that some people have the kind of faces that seem quite perfect – they have a straight nose, and maybe good skin and nice lips – but they still don’t look nice. Like, I wouldn’t want to be stuck in an elevator with them. And they definitely don’t smile a lot. Then there are other faces that might have skin that’s a bit bad, and maybe their nose isn’t the prettiest, or their beard grows in funny directions – but they look really nice! And they smile loads. I’ve thought about it a lot, and I think it’s all to do with what’s happening inside people.

Bring some diversity to your school read on the wings of a dragon named H2O. Once your families enjoy Planet Omar: Accidental Trouble Magnet, they will be ready to explore the rest of the series.

Read More
We use cookies to ensure that we give you the best experience on our website. If you continue to use this site we will assume that you are happy with it.Ok