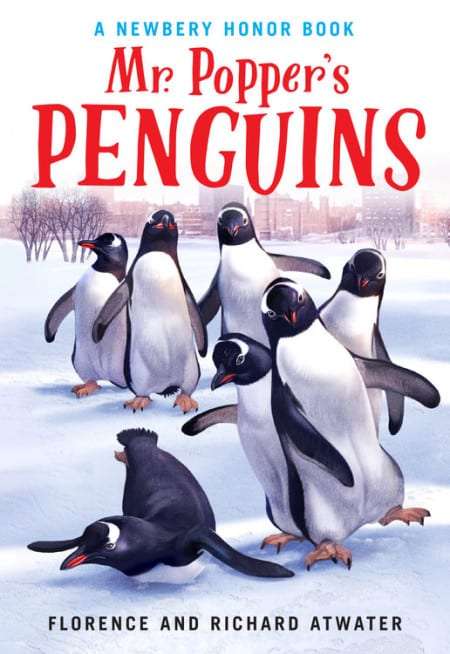 An old chestnut and winner of a Newbery Honor in 1939. But just as intriguing for its age.

If your school is looking for a book that escapes the challenges of the 21st century and returns readers to a nostalgic time, Mr. Popper’s Penguins is such a book. First published during the Depression – it is miraculously still in print. Why is that?

It’s because, like other classic children’s literature from earlier times – such as L. Frank Baum’s The Wizard of Oz or Ruth Stiles Gannett’s My Father’s Dragon – it takes a simple fantastic premise, and runs riot with it.

Mr. Popper is a house painter in his hometown of Stillwater, but he dreams of Polar expeditions. As part of his interest in all things Antarctic, he attempts to raise a troop of penguins – in his “neat little bungalow at 432 Proudfoot Avenue.” Fantastical, yes. And yet it has been engaging and beguiling generations of children who have marveled at the silly antics of the penguins. Who wouldn’t love to have giant snowdrifts in your house and learn to slide down them on your belly from actual penguins?

When feeding and housing the penguins gets to be a strain on the family budget, the Popper family trains the penguins to perform and takes them on the road. In the end, though, penguins belong in cold climes, and Mr. Popper finally gets his chance to join a Polar crew with his beloved penguins. No special effects and pyrotechnics needed, just a sweet story, well told, from yesteryear.

This simplicity allows readers and listeners of this novel to re-acquaint themselves with the value and beauty of lovely English prose – meant to amuse and entertain. It also gives students and families a chance to discuss how society has changed in the intervening decades. So, while the antics of the penguins will delight your students, there is a little more to consider as you read together.

Mr. Popper’s Penguins tells the story of aspirations and adventures in 150 pages, with delightful illustrations to support younger listeners. It is a great first step into family read-alouds, and will lead your families to eagerly look for their next book.