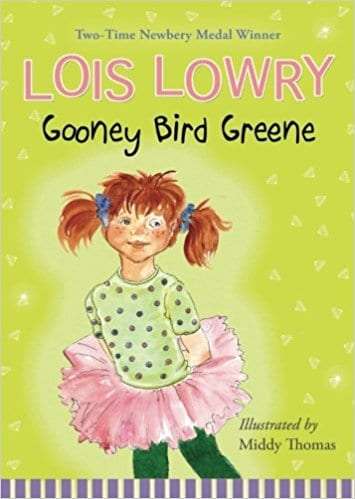 Gooney Bird arrives at the door of Mrs. Pigeon’s second grade classroom announcing, “I’m your new student. My name is Gooney Bird Greene – that’s Greene with a silent ‘e’ at the end – and I just moved here from China. I want a desk right smack in the middle of the room, because I like to be right smack in the middle of everything.” And thus we are introduced to Lois Lowry’s unforgettable Gooney Bird, the star of a series of six books.

Gooney Bird is her own person. She dresses in her own way – pajama pants with cowgirl boots, tutus and bright green pants, sparkly diamond earrings and knee socks. More than that, though, she is a natural storyteller and all of her stories are “absolutely true,” in spite of them sounding fantastical. So, when she says that she came from China on a flying carpet, she means it. She came from a town named China and the flying carpet was a rolled-up rug that flew out the back window of their car.

For schools that are focusing on writing, Gooney Bird Greene is a master class with so many opportunities to learn how to make writing better. Gooney Bird talks about secondary characters, the need for suspense, the best way to deliver a story – with some costume or prop elements, but without overdoing it. She also instructs that adding “suddenly” makes any story more exciting.

She paused. “I’ve explained before,” she said, “about the word suddenly. It makes things exciting. Sometimes, class, if you’re creating a story and you get stuck, just say the word suddenly and you won’t have any trouble continuing at all.”

Along the way, she empowers her classmates – and her teacher – to become storytellers, too. The book culminates with Gooney Bird showing that they all have what she calls “invisible stories” inside them, just waiting to be told.

Gooney Bird breaks the mold of the spunky little girl who gets into scrapes. She doesn’t bumble through her life but instead takes charge of her life, living it her way. Told in a brisk 115 pages, complete with whimsical line illustrations, Gooney Bird Greene is a delightful way to introduce your families to the joy of storytelling and reading aloud. 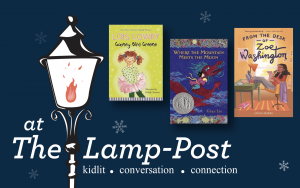 Sticking with Your Story, a Journey of Persistence

“Dream with ambition, lead with conviction, and see yourself in a way that others might not see you, simply because they’ve never seen it before.” 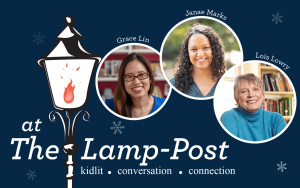 “All the stories that you read, they will help you someday. They will give you the strength to get you through something someday.”  Three writers at 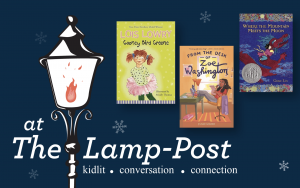