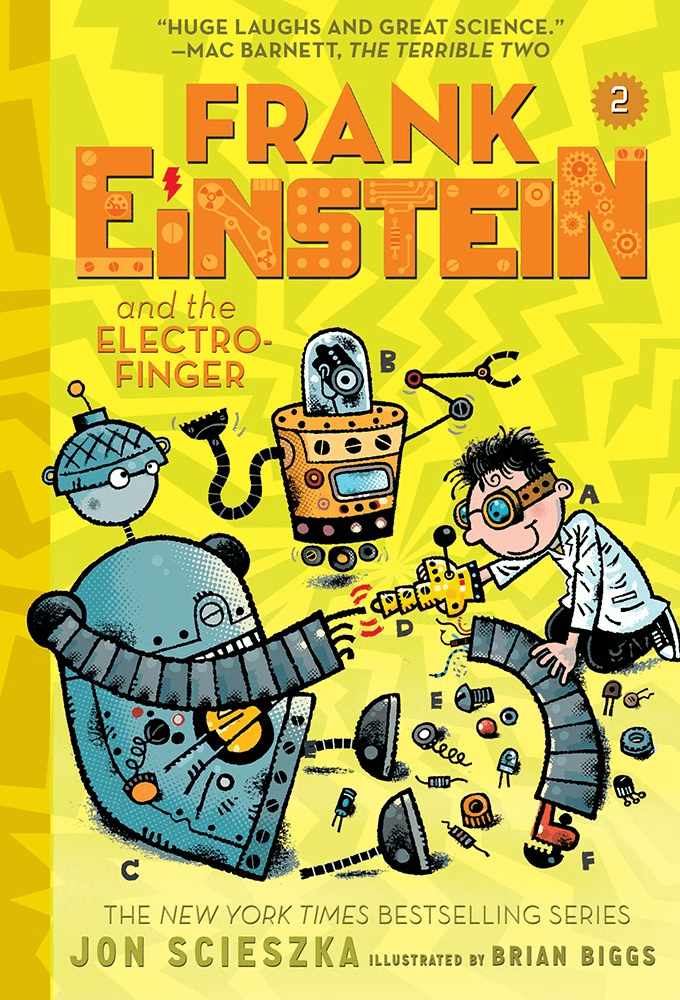 Frank Einstein and the Electro-Finger

“That is tooooo weird,” marvels Watson. “Magnetism can make electricity. And electricity can make magnetism. But I guess that’s right. ‘Cause both are moving electrons around.”

Frank jumps up from the lab bench. “And since the Earth acts as a giant magnet, imagine how much electricity Earth could make. And imagine if we could tap into it anywhere. And shoot it out – like a static-electricity finger!”

And so begins a STEM-filled tale of electricity, invention, and heroism.

Jon Scieszka’s flair and passion for writing is in full flourish as he plots the scientific adventures of our favorite kid scientist, Frank Einstein. Well-known for his humor, Scieszka manages to entertain and educate his readers at the same time. The topic is electricity and Scieszka teaches readers more than the average high school science class while laughing all the way. The story sizzles with scientific facts and information that come to life with fun, lovable characters and clever illustrations.

Frank, kid-genius and inventor, has just invented the Electro-Finger, a way to create free electricity for the world! As he attempts to demonstrate his new invention at Midville’s outdoor movie screening, he discovers that the evil duo of T. Edison and his sidekick Mr. Chimp are trying to destroy the town’s power supplies. Frank assembles an eclectic team to combat this evil plot: his Grandpa Al, his friends Watson and Janegoodall, and his robots Klink and Klank. Together they will save their town and its energy sources, but – of course – the path to success is peppered with plenty of opportunities to learn from failure.

Frank’s love of science and all things mechanical will be an inspiration for your budding engineers. Be ready to grab some magnets, wire, and other miscellaneous supplies because young readers will be compelled to test Frank’s theories and recreate his experiments. They will learn about renewable energy sources and energy transmission, and it’s all explained clearly with bold graphics.

Frank Einstein and the Electro-Finger is not just a manual for learning about electricity. The compelling characters provide plenty of opportunities to discuss friendship, persistence, loyalty, and courage. There’s even some American Sign Language in this book!

Thank you Jon Scieszka for reminding us that learning can and should be a rollicking adventure!