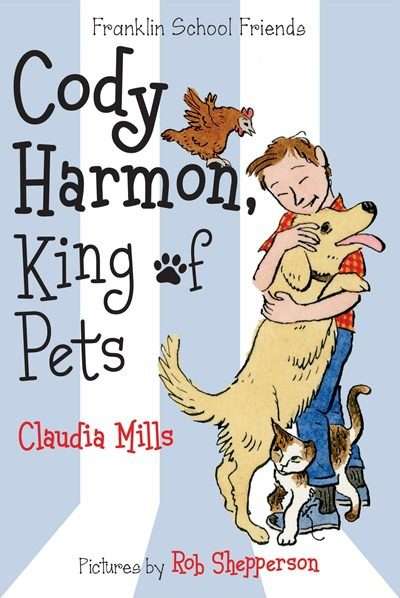 An Intro and Sweet Spot title

“Next week is our first-ever Franklin School pet show!”

This is great news for Cody Harmon, who truly is the King of Pets. He has nine pets he could potentially showcase – two dogs, two cats, three chickens, a rooster, and a pig. Which to choose!? But for all the kids in Cody’s class who are without pets, a pet show is a challenge.

“There is poor work. There is disappointing work. But then there is unacceptable work.”

Cody is assigned to write an animal report, but the assignment he turns in…isn’t very good. Reading, spelling, and math aren’t exactly Cody’s strong suits, and Mills hints that Cody struggles with a learning difference, which some of your student readers will surely understand. Cody knows everything about animals, but school is hard for him.

“Cody’s heart clenched inside his chest.”

The pet show also poses moral dilemmas for Cody. While playing a game at recess, his best pal, Tobit, throws a rock at a squirrel, horrifying Cody. Tobit is hoping to enter Cody’s favorite dog, Rex, in the show, but now Cody isn’t sure he can trust his friend. Should he stand up for his love for animals, or would that betray his friend?

“In the gym and the library, kids and their parents were busy dressing up pets.”

Mostly, this is a gentle novel loaded with fun and the anticipated Pet Show is the grand dénoument. There’s a talent portion and a costumed pet parade. Cody resolves his dilemma by sharing each of his pets with various students so everyone can participate.  It’s a win-win-win for Cody, and his classmates, and the Pet Show. Naturally, the costume portion devolves into chaos, providing the light, playful humor that students and teachers all appreciate.  And Cody’s generous solution, along with some help from their big-hearted principal,  allows him to resolve his tension with Tobit.

Claudia Mills has authored a series of funny, touching stories about students with special talents like Cody, The Franklin School Friends. Cody Harmon, King of Pets is the perfect, accessible Intro title that will delight Read to Them families and classrooms.

Back to Our Books
X