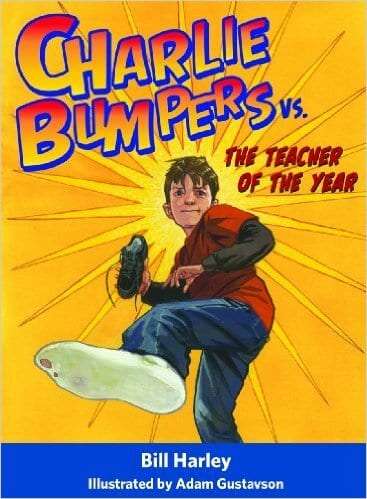 Charlie Bumpers vs. The Teacher of the Year

Charlie Bumpers is an Everyman, or Everykid. He’s someone we’re meant to identify with, a regular kid, not a great student, impish and not quite innocent. And every time he tries to do something interesting or innovative, he somehow gets in trouble. You know that kid, right?

“I know all about you, Charlie Bumpers.”

In Charlie Bumpers vs. The Teacher of the Year, the first of Bill Harley’s seven-book series, Charlie must face his 4th grade year with his new teacher, the notorious, unforgiving Mrs. Burke. Who did Charlie accidentally hit in the head with his sneaker while messing around in the hallway with his friend last year? You know who.

Mrs. Burke is described with delight by Harley, through Charlie. She’s an egret, looking for a fish. Charlie says her finger snap is so loud, she had “exploding fingers.” But Charlie eventually comes to learn that the eagle-eyed Mrs. Burke is not only perceptive, she’s also sympathetic, just when he needs her to be.

There are plenty of school hijinks involving underwear, an art project, a footrace, toilet paper, and a new sneaker that ends up on the roof. In addition to his friends, Charlie must navigate the goody-two-shoes Samantha Grunsky and Hector, the new kid from Chile. There are also other adults to complicate school days like the custodian, Mr. Turchin – retriever of roof-bound shoes – and the gym teacher, Mr. Shuler – otherwise known as the “Supreme Commander of Soccer Balls.”

“Your closet looks like a tornado came through and decided to live there.”

Charlie Bumpers doesn’t just take place at school. He has an equally lively family life including an older brother, Matt, who doesn’t always share the cookies, and a younger sister, Mabel, alternately referred to as Squirt (by her father) and as the Squid (by Charlie). As one might imagine, home life yields its own ethical challenges as Mabel is wise to Charlie’s school life. “But it would be lying if I knew something and didn’t say it,” Mabel sagely comments.

Bill Harley (who is also a Grammy-winning songwriter and recording artist for children) conveys Charlie’s world with easy grace and style. We see the world through Charlie’s Everykid eyes. The adults are there primarily as foils who don’t understand about homework, about what’s cool and not cool, and about how small mistakes can snowball.

Charlie Bumpers is funny and stimulating and ideally accessible for new read-aloud families, and the playful illustrations help support even the youngest listeners.