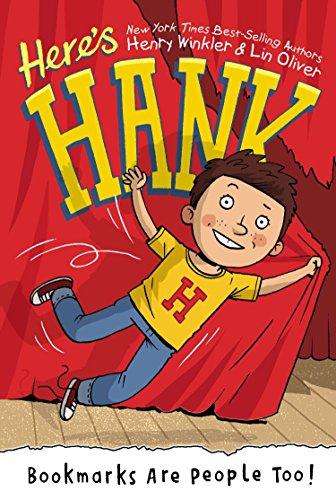 Bookmarks Are People Too!

“Papa Pete always says laughter is good, but not as good as a pickle.”

Bookmarks Are People Too! is the first book in the Here’s Hank series, books that re-package Henry Winkler’s lovable character Hank Zipzer for younger readers. Don’t worry – these Intro level books retain all the hilarity and shenanigans of the Hank Zipzer novels.

In this title, Hank and his classmates are putting on a play for Children’s Reading Week, written by their teacher, Ms. Flowers. Hank is pretty nervous about reading and memorizing the script. Hank has dyslexia, just as in the Hank Zipzer series, although it is never explicitly named. Instead, Hank talks honestly about the challenges he faces with his schoolwork. As he looks at the script for the play, “All the words started to swim on the pages.” But, don’t worry. Hank’s Frankie – “best friends since we were babies” – is there to help.

The sweetest parts of this Intro Title are Hank’s relationships, especially his closeness with his grandfather, Papa Pete, and his longtime friendship with Frankie. When Hank is dejected about being a bookmark in the class play, Frankie is there to encourage him:

“Listen, Hankster,” Frankie said. “No matter what the part is, you’re going to be great.”

These long-standing relationships, along with a new friendship with Ashley Wong, help ground Hank when everything seems too hard.

Hank is an unexpected hero. He has his downfalls, makes his mistakes, but ultimately saves the class play. The writing is funny and will delight students and their families, especially the witty back-and-forth between Hank and Frankie. Henry Winkler and Lin Oliver cleverly pepper real locations in New York City throughout the story, giving the setting a realistic feeling. Young students will relate to the students in Hank’s class: the attention-seeker, the new kid, the spelling bee winner, and Hank himself.

So, grab “a real sandwich, with some pickles on the side,” and laugh and learn with Hank in this quick read of 128 illustrated pages. Once your families fall for the Here’s Hank series, there are many more for them to enjoy.