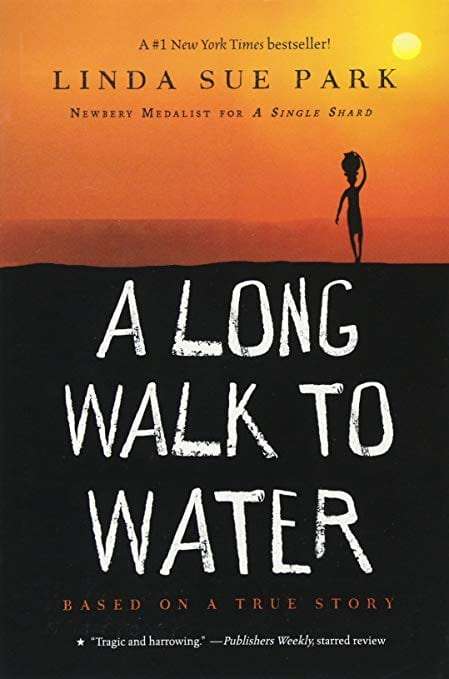 A Long Walk to Water

“A step at a time. One problem at a time—just figure out this one problem.”

Linda Sue Park tells a story of perseverance, a story of hope, a story taken from recent history. A Long Walk to Water is Salva Dut’s story, but it’s also a story of so many others who are born into dire circumstances and the heroic journey they must take to overcome them. Park simply yet convincingly sheds light on the reality of war’s effect on children and families, while kindling a flame in readers that might empower them to make a difference.

During the Sudanese Civil War (1983-2005), Salva becomes one of the thousands of “lost boys,” separated from his family. He is forced to travel on foot across hundreds of miles through hostile territory and harrowing situations. During his nearly ten-year journey, Salva survives starvation, animal attacks, and disease, yet he manages to keep the words of his uncle in mind as he covers the African continent: “Do you see that group of bushes? You need only to walk as far as those bushes.” Salva’s hope and determination are put to the test as he faces losing everyone that he loves and cherishes. His resolve proves stronger than his despair, and he manages to find the strength that lies within himself.

Salva’s true story is juxtaposed with a fictional story of Nya, a young Sudanese girl whose days are consumed with endless walking to get water for her family. “To the pond and back—to the pond and back—nearly a full day of walking altogether.” These mesmerizing dual narratives weave together to create a culminating story of hope, forgiveness, and kindness. The heartfelt and uplifting conclusion meshes these characters’ stories into one, when Salva returns to Sudan and oversees the well digging in Nya’s village, even though her people had long been at war with his.

“Why would a Dinka bring water to us?” she wondered aloud.

“I heard Uncle and Father talking about him,” Dep said. “He has drilled many wells for his own people. This year he decided to drill for the Nuer as well.”

Linda Sue Park tells a story of determination, opening a window for readers to learn about a life and land that may be far from their own experience. Through this beautiful, briskly-told story, readers will broaden their world view, and they may feel called to action. (We also feature a Picture Book Companion to this book, Nya’s Long Walk, for younger listeners.)

Can a book that can change your student’s perspective of the world? Yes, and this might just be the book that does it.

Brian Pinkney’s illustrations give movement and color to the story of Nya as she struggles to get water for her family in South Sudan.