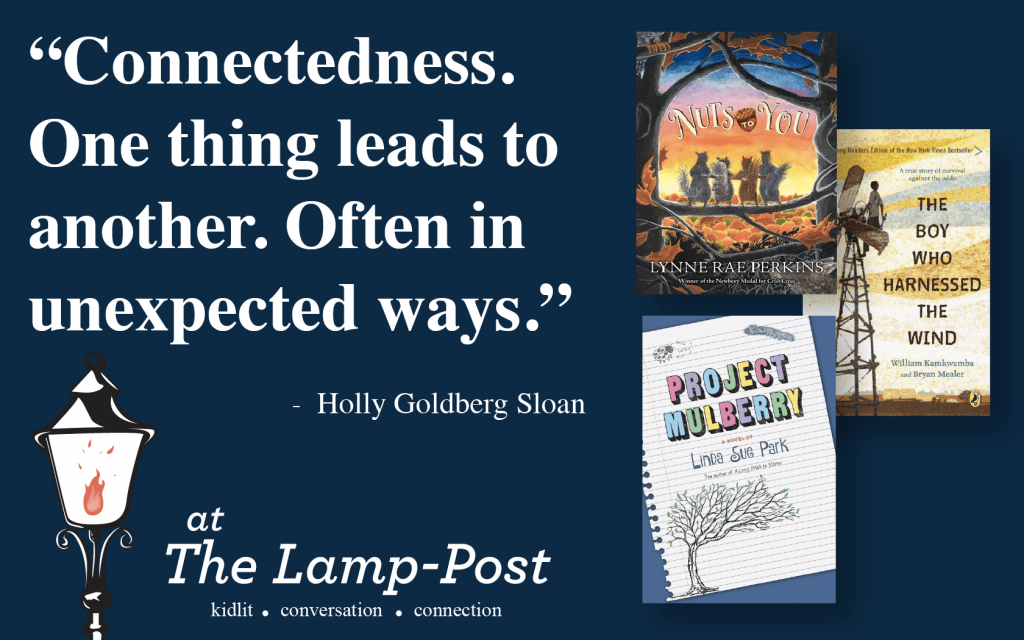 “Connectedness. One thing leads to another. Often in unexpected ways.”

Recently, I had the pleasure of moving my young adult son halfway across the country. In truth, it wasn’t pleasurable. It was hard and sad and scary. But I pretended like it was pleasurable. Because – after graduating from college during the pandemic and being isolated at home for the last two years – I knew it was high time my son had the chance to live on his own, to start his life, to become the person he is meant to be. This period in history has robbed many of our young people from having the chance to do that. My kid was more than ready. I, on the other hand, was not.

But within hours of arriving in Oklahoma, things shifted. I watched the people of his new community fold him into it as if he already belonged there. From the older man in the apartment next door who insisted on waiting for the mattress delivery, to the new boss who told my son she would “try hard not to ‘mom’ you too much,” I knew this kid already had a village. A village that would pick up where his family left off. As I waved goodbye and drove my rental car back to the airport, I knew everything was going to be okay. Others would make sure of it.

There is an interconnectedness we experience when we ask – then trust – others to be part of our story. There is a coming together when we realize we are in this together. This month, At the Lamp-Post has been exploring the theme of Earth Day through three titles on our list that tackle different environmental issues. Whether they hail from a small suburban town, a farmer’s vegetable garden, or a remote village in the middle of Malawi, the protagonists in these books learn that working together on a micro level can lead us to tackle issues on a macro one, that our environments can only be protected when our interconnectedness is understood. Change can only happen when we ask others to care about something as much as we do…then trust them to do so.

Linda Sue Park’s Project Mulberry starts out being all about teamwork. Julia, the main character, and her best friend Patrick are the kind of friends that – when one is mad, the other, “almost always knows it without asking.” But when Julia’s Korean-born mother suggests they raise silkworms for their state fair project – and Patrick whole-heartedly embraces it – Julia suddenly doesn’t feel so best friend-y toward him. In fact, she tries to sabotage the project. Raising silkworms is way too “Korean” for Julia, who desperately wants “a nice, All-American, red-white-and-blue kind of project.” 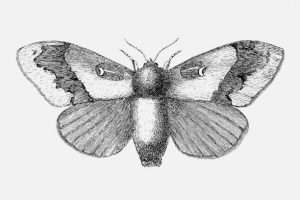 It’s easy to sympathize with Julia. She wants to find a project she’s passionate about, but raising silkworms just isn’t it. Yet, she realizes that letting down Patrick would be, “a lousy thing to do to a friend.”

As Julia wrestles with her feelings toward the project, others embrace it. From Mr. Maxwell, the sustainable farmer who runs the Wiggle Club, to Mr. Dixon, the man whose Mulberry tree supplies leaves for the silkworms, a community of caregivers is created. Even Kenny, Julia’s annoying little brother, begins to take the project seriously when Patrick asks if he will record the temperature inside the aquarium every day. “It’s a matter of life and death,” Patrick tells him. As the community around the project grows, so does Julia’s passion for it. By the time the silkworm eggs hatch, she is no longer thinking about what is best for her and is instead focused on what’s best for the whole – for the project, for the people involved, and mostly for the “little tiny itsy-bitsy worms” that will eventually spin the cocoons of silk. In the end, true teamwork is evident when it’s time to kill the worms in order to collect the thread. Patrick knows without asking how this makes Julia feel.

So together, they pick which cocoons they will boil for the silk. Together, they decide which worms will get to live and turn into moths. And together they bury the dead worms, knowing their decomposing bodies will go back into the soil. Together – along with their community of caregivers – they flesh out, work through, and celebrate the highs and lows of a project. That’s teamwork. That’s interconnectedness.

“He was only one squirrel. There wasn’t much time. What should he do?”

This is the underlying question in Lynne Rae Perkins’ beautifully written book, Nuts to You, a story about one squirrel whose “unfortunate snatching” by a hawk sends him and his whole squirrel squad on an incredible journey of self-discovery, survival and how to best care for not only oneself, but the greater community. After Jed’s disappearance, the rest of the squirrels are shocked and sorrowful. “Let’s eat a nut and remember our friend,” says one. But Chai and TsTs – Jed’s best friends – have already put a different plan in motion. TsTs is pretty sure she witnessed the hawk dropping Jed, and she convinces Chai to set off with her to find him. Eventually they do, but their journey reveals more than just their friend’s whereabouts – they learn that humans are chain sawing their way through the forest, cutting down tree branches around the “buzzpaths” (power lines). Clearly this poses a great threat to the squirrels’ home and the lives of their family and friends.

“Amid screaming flashes of silver, homes and highways crashed to the ground, where they piled up in heaps of wreckage. There was nothing to do but run.”

And run they do. Jed, TsTs and Chai run until they realize they can’t run from it anymore. They must go back and convince the other squirrels that the “racket” is more than just an annoyance; it’s an imminent danger on the way to destroy their community. But squirrels – they aren’t easily convinced of things. Especially when they’re busy preparing for what they see as the real threat – winter. Jed, TsTs and Chai have to get creative and figure out a way to move everyone, and quickly. So, they make it into a game. 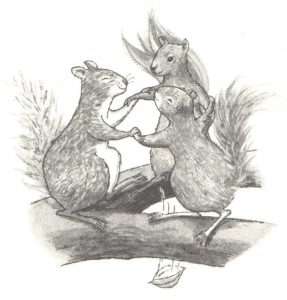 “Why will they believe it’s a game, when they don’t believe us about the racket?” asked Jed.

“Because, like all of you have been saying,” said TsTs, smiling, “we’re squirrels. We want to believe in games.”

Nuts to You is not only a book about the environment and what is happening to it, but it’s also a story about what it feels like to care deeply about something and be reliant on others to help preserve it. It’s a story about what happens when we can’t take care of something alone…when we need others to help us do it. Sometimes teamwork is the only way we can get to where we need to go – physically, emotionally, or psychologically. Change happens when everyone moves toward the same end game, even – as in the case of squirrels – when the game has to be silly before it becomes serious.

Change also happens when teamwork allows one person’s vision to become everyone’s reality. In William Kamkwamba’s autobiography, The Boy Who Harnessed the Wind, we meet young William, a brilliant boy growing up in a poor village in Malawi. William loves hearing the folktales his father tells at night, though eventually he develops a “healthy dose of skepticism” and begins to look at the world in a different way, one that he decides is “explained by fact and reason, rather than mystery and hocus-pocus.” As his love for science grows, so does Malawi’s death toll from the famine that grips the country. Growing, too, is the belief among the villagers that William is “misala” or crazy, as he gathers junkyard scraps to build what he thinks may “change the lives of the people around him.” But those people taunt him, saying, “Ah, look, the madman has come with his garbage,” and that William is, “just a crazy boy who plays with toys and refuses to work.”

William sees it differently. And, despite the teasing of the villagers or the initial doubt of his own family, he also sees something else. Like Julia in Project Mulberry, he sees something bigger than just him.

“Where others see garbage, I see opportunity.”

William is set on building a windmill and finding the people who are willing to help him. Ms. Sikelo, the librarian, teaches him how to borrow books from the tiny library in the primary school. His father is eventually willing to part with his bicycle so that William can use it for the frame of the windmill. The welder, Mister Godsten, connects the shock absorber shaft to the bicycle’s bottom bracket, allowing the wheel to spin. Even William’s friend, Gilbert, digs up the drainage pipe from his family’s bathhouse, a move that’s quite unpopular with his father. William forages for people to help move his plan forward in the same way he forages for trash he will turn into treasure.

“What can do the pedaling for me so that both of us can dance?”

Though his vision is unclear, his tribe of supporters begin to believe in him. William is the brains behind the project, but his success is directly enhanced by his interconnectedness with others. Never does he lose faith that others will see the project the way he does. He keeps his focus on the fact that building the windmill will prove to be for the greater good. He is convinced that, “If we can all invent something to make our lives better, we can change Malawi.”

The Boy Who Harnessed the Wind reminds us of the power in teamwork. Of encouraging others to get behind an idea, even when the outcome isn’t clear. William sees opportunity in dreamers, and that vision drives others to dream.

There’s a phrase that many believe to be an old African proverb: “It takes a village to raise a child.” That phrase resonated through my head a few weeks ago as I boarded the plane leaving Oklahoma. I thought about my son, and the big life ahead of him. I thought about the people who would serve as stepping stones to that big life. And I thought about the characters in these three books – how each of them came to realize that their success, survival, or vision would only manifest if they asked, then trusted, others to believe in them.

Growth happens when we realize we are not alone. When we reach for the talents and treasures of others. When we realize we can breathe easier because someone will pick up our work and move it forward. These three titles help us celebrate the power of teamwork. They remind young readers of the interconnectedness of our world and that – together – we can make big differences for our planet. And we can thank our stars for each of our own little villages.